SomTribune
Home General Interest Climate Crisis in Somalia: “If the Rains Fail, Our Livestock will Perish” 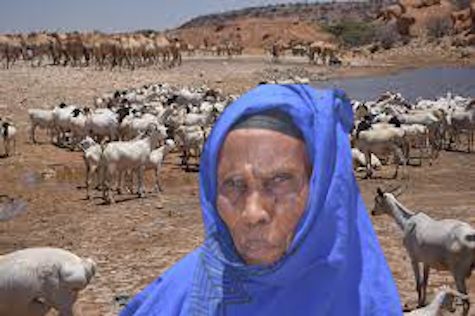 Somalis are no strangers to hardship, having endured years of drought, conflict and instability. Last year saw a devastating infestation of desert locusts, extensive flooding and COVID-19, which brought new health and socioeconomic woes. Now the country is again facing critical water shortages, which are causing livestock deaths, mounting hunger and an inability to cultivate crops, triggering the flight of over 80,000 people in recent months.

Salima Ali, a mother of three, is one of those who fled, trekking from Afmadow district in southern Somalia’s Juba region to Baardheere, a town further north, to seek water and pasture for her herd. So far, she has found neither.

“If help does not come our way, or the rains fail, our livestock will perish and we will have nothing left for our livelihoods,” she told the UN’s humanitarian agency, OCHA.

Baardheere district has seen the arrival of hundreds of families from Gedo and other regions due to water shortages across Jubaland State.

Somalia has two rainy seasons, called the Gu and the Deyr. The Gu rains which last from April to June are expected to bring below average this year. Water shortages are already critical; low reserves from the already poor October-December Deyr rains are contributing to incredibly high hunger levels across the country. One in five Somalis — 2.7 million people — will face crisis levels of hunger between April and June, say experts from the Food and Agriculture Organization who monitor developing hunger crises in Somalia.

In some hard-hit areas, such as the Hiraan region of Hirshabelle State in south-central Somalia, almost one in two people is experiencing water shortages. Altogether, 34 of Somalia’s districts are affected. Those in Somaliland and Puntland in the north are worse off, as well as northern coastal states and southern Jubaland State.

“There was a serious drought here in 2017 and people lost their livelihoods,” said Ahmed Hassan, Governor of the northern Sanaag region. “Another drought would be devastating.”

The pre-drought conditions have brought tough survival choices for Salima. She explains: “Two of my children were going to school but I had to bring them with me. We had to choose between education and trying to save our remaining animal stock.”

In many areas of Jubaland, animals are dying. Humanitarian assessments have confirmed depleted water sources and lack of pasture, which are fundamental to animals’ survival.

Farhiyo, a 48-year-old mother to 10 children, left Qaydara village in Hobyo district after losing 20 goats due to lack of water. She arrived in Gaalkacyo town last week.

“My husband left for Mogadishu [the capital] three months ago, leaving me to care for the family,” she said. “I live in a makeshift shelter with my seven boys and three girls.”

Farhiyo is not alone. The settlement is now home to 385 families displaced from 48 villages around the region.

Local authorities are calling for help. In Galmudug in central Somalia, the Ministry of Livestock has asked aid agencies to help truck water and animal feed to hard-hit families; help herders and farmers restock their diminished herds; and give cash transfers to people who have nothing left.

In Somaliland, authorities have asked for assistance to drill boreholes, especially in schools, as water shortages will worsen sanitation problems, cause disease outbreaks and, worst of all, make it harder to adhere to COVID-19 prevention measures.

Humanitarian workers have set up a flooding task force and a national coordination system, bringing together humanitarian, development and peace organizations. In turn, local committees are coordinating medium- and long-term flood responses with local authorities, including transboundary water-management issues and nature-based solutions.

To get families through the coming weeks, humanitarian agencies have so far trucked water to almost 50,000 households, reaching about 300,000 people. But distribution is not easy — water trucking is notoriously expensive and dangers are involved in insecure areas.

OCHA has allocated US$13 million from the Somalia Humanitarian Fund and is about to release $7 million from the Central Emergency Response Fund (CERF). CERF will channel a further $20 million to anticipatory action to support vulnerable Somalis before they feel the full impact of the failed rains. Evidence shows taking action before hunger reaches crisis proportions saves lives, reduces suffering and costs.

Erratic weather is expected to continue throughout the year, said Adam Abdelmoula, the Humanitarian Coordinator in Somalia. The priority is taking anticipatory action to preempt adverse outcomes and build resilience so that Somalia can withstand future shocks, he added, noting that ultimately the solution should be comprehensive and span not only humanitarian and development but also peacebuilding action.