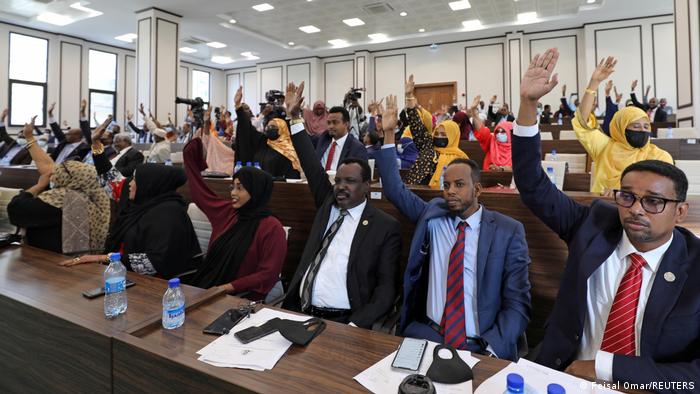 The fleeting political coup in Mogadishu has plunged the impoverished and conflict-ridden Horn of Africa nation into a crisis with far-reaching negative ramifications. The coup in fact, has come at precisely the wrong time for Mogadishu and the rest of East African region and as such, weakens the country. Just over the border in Ethiopia and Eritrea, critical economic and security challenges are mounting while beyond the two boundaries, Egypt and Sudan have waged a war on Ethiopia, now an errant neighbor over borderline farmlands and the waters of River Nile. Today, the world is being drawn deeper into Somalia’s unending conflicts. Diplomats and Intelligence officials are so far back footed at the chronology of subversive events by the former President who has refused to cede power. Interestingly, FGS under Mohamed Abdullahi Cheese Farmaajo was unable to combat its own domestic militant movement, the Al-Qaeda branch in Somalia, Harakat Shabaab al Mujahideen and feed its severely impoverished populace, but now, it is bellicosely challenging the international community and that signifies intentions to dig in for a long protracted war.

The Coup, Plotters, Plan, and Intent.

The political coup was orchestrated from within certain divisions of the military, political class, and sections of cabinet loyal to Farmaajo. The coup was against the Somali constitution and sociopolitical order. It was condemned worldwide, termed as despicable, destabilizing, and intolerable. To sustain the coup this errant group will now engage in heavy purges of the armed forces, police, and within its political patronage system, a very sensitive and unsustainable war strategy. The current structures of the Somali National Army (SNA) is largely ethnic and foreign funded thus extremely fragile. Already, we’ve noted this fragility manifesting through defections, low morale due to lack of pay, threats of taking over the capital through violent means, and unilateral politically biased action by formation commanders of both SNA and the Somali police force. This will make it difficult for Farmaajo to use the military and the police as instrument of his untenable national strategy and grip on power.

Ostracize and Sanction Farmaajo Club, and Subsequently Recognize Opposition’s and Upper House Resolutions and Electoral Process and its end result.

To hamstring Farmaajo, boldly and effectively, and subsequently put the coup down, the European Union, The United States, Britain, and IGAD (though IGAD has been compromised by Farmaajo thus less useful to the players) must ostracize the putschist. Sanctions, freezes, travel bans, and charging them with crimes against humanity will break their union cord and subsequently weaken their resolve. That will force them to resign to fate and subsequently give up.

The masterminds of the political coup plan to dig in and hold on to the little power provided by the militia guised as foreign trained military. SNA is fast fracturing ethnically and professionally, it cannot last under a dictatorship. These plotters don’t have any leverage hence sitting ducks militarily. Sanctions and isolation will wear them down since they are 65% dependent on foreign aid and the meager 35% by the stalwarts, domestically and foreign, will be unavailable sooner or later. That’s a significantly debilitating hamstring and Farmaajo cannot survive it whatsoever.

Ostracized and wanted, Farmaajo’s last option will be to retreat to ethnic militia in Middle Jubba or East of Gedo, or worse, make concessions with the Marehan stalwarts who run the Al-Qaeda branch in Somalia, Harakat Shabaab al Mujahideen political wing. That’ll mean paying several million dollars for protection and quiet life.

Recognizing a constitutional process spearheaded by the upper house and politically backed by the opposition which is obviously the majority will pave way for a forceful removal from office through a popular initiative. The citizenry, business community, diaspora, political class, and sections of the ruling class are ready to help kick out Farmaajo, but ‘a little shy’ maybe. The remnants of the military will embrace the outcome and that will open doors to a stable and optimistic Somalia.

The Hawiye and Ogaden, besides the Marehan moderates should fold their pride bags and camp together and save Somalia from the impeding and unprecedented political and militia violence.