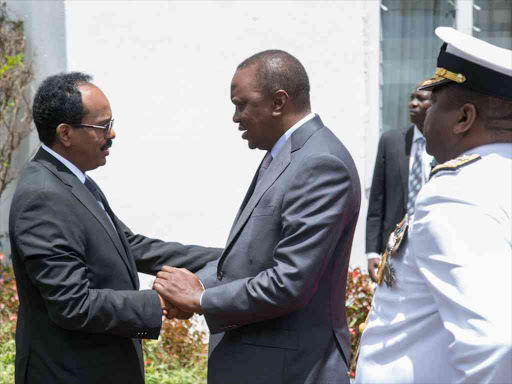 Somalia’s Ministry of Information said they were resuming the relations “in keeping with the interests of good neighbourliness”.

“The two governments agree to keep friendly relations between the two countries on the basis of principles of mutual respect for sovereignty and territorial integrity, non-interference in each other’s internal affairs, equality, mutual benefit and peaceful co-existence,” the statement said.

Acknowledging the development, Kenya’s Foreign Affairs ministry said it looks forward to further normalisation of relations by the Somali authorities.

“The Ministry of Foreign Affairs acknowledges the continued support that has been extended from the international community, and in particular the government of Qatar, in efforts to normalise the diplomatic relations between Somalia and Kenya,” the release said on Thursday.

Somalia is amidst a political standoff over elections, which were said to have led to the severing of relations on December 15, 2020.

Mogadishu cited interference in its domestic politics, claims Nairobi denied. There have also been issues over the maritime dispute that is at the ICJ.

A week after the severing of ties, presidents Uhuru Kenyatta and Mohamed Farmaajo met in Djibouti for the 38th Igad Extra-ordinary Summit where the matter was discussed. A team was formed to look into the allegations.

In a report in January, the team reported there was no evidence to confirm Kenya’s interference.

“The commission considers that these grievances, some of which are longstanding, do not appear to it to be sufficient to justify a diplomatic separation between Kenya and Somalia,” the Djibouti-led team said in the report.

This was after AU chairman and DRC President Felix Tshisekedi, on Farmaajo’s request, asked the Peace and Security Council to look into the matter.

“It has come to our attention that two AUSPC members, namely, the Republic of Kenya and the Republic of Djibouti, are engaged in sinister campaigns aimed t derailing the political process in Somalia by trying to influence the outcome of AUPSC meeting to detriment of the future of the Somali people,” Somalia said in a statement.

AU Commission chairman Moussa Faki in December last year had also called for dialogue between Kenya and Somalia to ease tensions between them.

Signs of white smoke started being seen in March, when President Tshisekedi travelled to Doha on March 28.

Qatar’s newspaper The Peninsula reported that other than Qatar-DR Congo bilateral talks, “views were exchanged on a number of regional and international issues of common concern”.

On April 19, Farmaajo flew to Kinshasa where he met President Tshisekedi and left. Uhuru arrived the following day. The visits triggered talk of negotiations, but Kenya’s Foreign Affairs PS Macharia Kamau said the trips were not related.

However, Horn of Africa analyst Abdi Rashid, noting Tshisekedi had just returned from Doha, said the deal would be for Qatar and DR Congo to mediate Kenya-Somalia tensions, and in return Nairobi extends support to Farmaajo.

Al Qahtani is the Special Envoy of Qatar Foreign Minister for Counterterrorism and Mediation of Conflict Resolution.

A statement by Qatar’s Foreign ministry said the message pertained their bilateral relations and ways of promoting them, “in addition to the recent political developments in Somalia, and the importance of achieving the national reconciliation in order to realise stability of the country”.

On Thursday, President Kenyatta also received a message from al Thani through al Qahtani. Around the same time, resumption of relations was announced in Mogadishu.