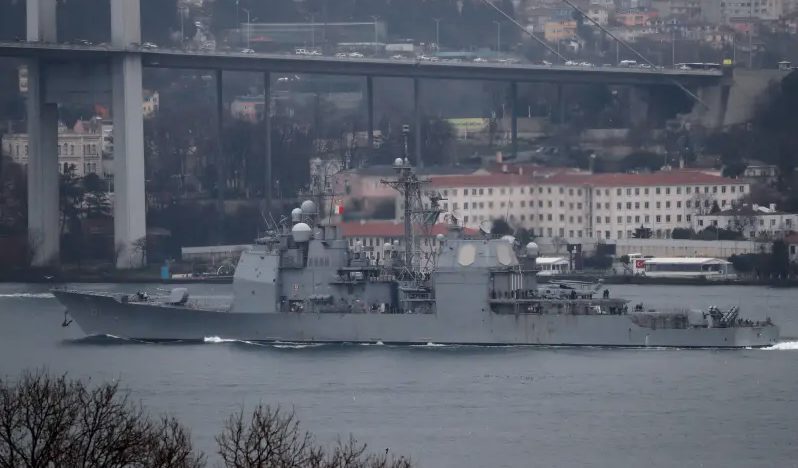 The raid comes amid tensions in Yemen and Iran’s attempt to support the Houthi rebels. However, it may be linked to other militant groups in Yemen or even the Horn of Africa or elsewhere.

An SH-60 Seahawk helicopter flying from the USS Monterey helped prevent a massive shipment of illicit weapons that were being transited through international waters in the North Arabian Sea.
The raid on a suspicious dhow sailboat by the US Fifth Fleet took place between May 6 and 7. It was made public by the US Navy through photos.
It comes amid tensions in Yemen and Iran’s attempt to support Houthi rebels there. However, it may be linked to other militant groups in Yemen or even the Horn of Africa or elsewhere.
The US said it conducts maritime security operations that entail routine patrols. The US posted photos on May 8 showing “thousands of illicit weapons interdicted by guided-missile cruiser USS Monterey… from a stateless dhow in international waters of the North Arabian Sea on May 6-7. Maritime security operations, as conducted by the US Fifth Fleet, entail routine patrols to determine the pattern of life in the maritime as well as to enhance mariner-to-mariner relations. These operations reassure allies and partners and preserve freedom of navigation and free flow of commerce.”
The US Fifth Fleet tweeted that the cache of weapons “included advanced Russian-made anti-tank guided missiles & Chinese Type 56 assault rifles.”
The Monterey led a US Coast Guard Advanced Interdiction Team that “discovered the illicit cargo during a routine flag verification boarding conducted in international water in accordance with customary international law.”
The weapons included advanced Russian-made anti-tank guided missiles, thousands of Chinese Type 56 assault rifles and hundreds of PKM machine guns, sniper rifles and rocket-propelled grenade launchers. Other weapon components included advanced optical sights, the report said.
“The original source and intended destination of the materiel is currently under investigation,” it said. “The materiel is in US custody awaiting final disposition.”
The identity of the dhow’s crew remained unclear. The Monterey tracked and watched the ship for 36 hours before boarding the vessel.
“After all illicit cargo was removed, the dhow was assessed for seaworthiness, and after questioning, its crew was provided food and water before being released,” the report said.
There is a lack of clarity as to why the weapons were confiscated and the crew was released. Considering that the value of the arms might be in the millions of dollars, it would be strange that the crew is entirely innocent and not involved in delivering the weapons.
The US stopped five shipments to the Houthis from Iran in 2015 and 2016. In April 2016, the Fifth Fleet stopped an alleged Iranian arms shipment to Yemen. This February, the US found another large cache of weapons but did not reveal the destination.
In February 2020, the USS Normandy stopped an arms shipment of Iranian-made weapons. They included 150 Dehlavieh anti-tank missiles. The US released the crew, who were allegedly just Yemeni fishermen. Apparently, fishermen sometimes carry anti-tank missiles instead of fishing rods.
In 2019, the USS Forrest Sherman stopped an arms shipment in this area. In that case, the missile destroyer was conducting routine maritime operations when it came upon a ship that was “dead in the water.” The ship had no flag, but the men on it were from Yemen. Weapons were found on board.
The US has also found 21 anti-tank guided missiles, “two previously unknown surface-to-air missiles, parts for an Iranian Quds-1 land-attack cruise missile, parts for an Iranian C802 anti-ship cruise missile and components for a third, unidentified cruise missile,” according to reports from 2020.