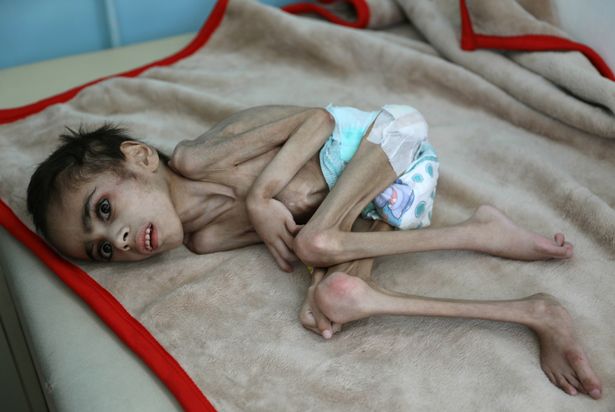 Deadly droughts and tropical storms charged by climate change could tip fragile and fractious states into armed conflict, an expert has warned.

Five countries have been singled out by a specialist in conflicts sparked by climate change as likely hotspots for future wars.

In the coming decades a combination of global heating, rising sea levels and extreme weather events will cause chaos in large stretches of the world.

Alex Randall is head of Climate & Migration, a coalition of organisations that work with migrants.

He believes climate change is unlikely to spark conflicts in democratic, rich and stable countries as it will be poorer or more troubled areas that will suffer.

Nations with histories of armed conflict and instability are the most vulnerable to wars triggered by floods, storms or droughts, he says.

“These aren’t countries that will be tipped into ‘climate wars’ in the next few years,” Mr Randall told The Mirror.

“Rather, these are countries that, because of their recent history of armed conflict, will struggle more than others to cope with the impacts of climate change.

Yemen is often referred to as a country suffering a ‘forgotten war’, with the UN estimating 223,000 people have lost their lives in the ongoing, seven year conflict.

According to Collin Douglas, of the Centre for Climate and Security, the country’s ongoing, multi-sided civil war has been partly fuelled by drought.

“Water scarcity in Yemen which has been exacerbated by climate change, may be a critical factor underlying the country’s instability, and prolonging and worsening its conflict,” he writes.

“Fuel prices, closely linked to the price of water in Yemen, helped spark the protests in 2014.

“Scarcity has made the humanitarian situation in Yemen, especially its cities, much worse since the beginning of the conflict.

“Yemenis among the most water-stressed countries in the world, brought on by regional drought, a naturally dry climate, and failed attempts at management.”

Even if the current troubles are brought to an end, Yemen’s geography makes it highly vulnerable to future conflicts

The Fragile States Index, which ranks countries on the likelihood that they break out into war, has Yemen at the top of the list.

In the hottest parts of Somalia the average daytime temperature is 40C.

According to its government’s estimates, that will have risen by more than 4C by the end of the century.

Already brutal temperatures and long periods of drought have wreaked havoc in the east African country, with tension between herder-farmer communities and settled people bubbling over as they compete for resources.

In 2019 alone crop failure forced 53,000 people from their homes, adding to the 2.6million Somalians displaced by conflict and a decade of famine.

The Norwegian Institute of International Affairs paints a troubling picture of the country’s future centred around livestock migration on vast planes of pastured lands.

“Because of floods, heatwaves and droughts, farming and livestock outputs are diminishing,” the organisation writes.

“This means that settled communities and herders are competing for fewer resources like green grazing grounds and arable land. This could potentially fuel tensions.

“And due to lack of government presence in parts of Somalia, pastoral communities sometimes resort to illicit trade and use of small arms and light weapons.

“They do this to protect themselves and their livestock from rustlers. Rustling has been a problem in Somalia for years but it is becoming an even bigger threat.

“This is because more livestock are dying from the weather-related effects of climate change.”

Small scale conflicts over food – exasperated by unpredicted events such as Somalia’s recent and devastating locust infestation – could domino into larger and larger scale showdowns.

In 2003 conflict broke out between rebel groups and the government in Sudan’s Darfur, which they accused of oppressing non-Arab groups in the eastern Sudan region.

During the years of ethnic cleansing led by President Omar al-Bashir that followed, 300,000 people – mostly civilians – are believed to have died.

As much as the sources of the Darfur conflict are multiple and conflict, its climate is a big aggravating factor.

“In the decades leading up to the 2003 outbreak of war, the Sahel region of northern Sudan had witnessed the Sahara Desert advance southward by almost a mile each year and a decrease in annual median rainfall of 15 to 30 percent,” writes the World Food Programme in an article titled ‘The First Climate Change Conflict’.

“Agriculturalists in Sudan are predominantly ethno-African, while pastoralists are disproportionately of Arab ethnicity.

“Fast-moving desertification and drought slowly eroded the availability of natural resources to support livelihoods and the peaceful coexistence of these two groups in the region.”

The combined effects of years of drought and civil war had left 40% of South Sudan’s population struggling to find enough food to survive as of 2017.

By 2050 the average temperature in the country will have risen by 3C.

To make matters worse, large recorded swings in rainfall year-to-year are likely to get more severe, leading to both more droughts and flooding.

In 2017 extreme flooding led to the displacement of approximately 100,000 people.

Two years ago hundreds of thousands of Haitians took to the street calling for the downfall of the government, who they claimed had misspent billions of dollars of agricultural aid.

The effects of the devastating Hurricane Matthew, which killed 1,000 people and left 140,000 without proper homes, were still being felt acutely two years later.

A year before the protests broke out 9,000 more people were left homeless by an earthquake – adding to the 35,000 still displaced after a similar quake in 2010.

Today, 2.6million Haitians live without reliable access to food, in large part due to the country’s chronically low rainfall.

All of these factors render Haiti susceptible to conflict, and all are aggravated by climate change.

At the beginning of 2021 enormous weekly protests against President Jovenel Moïse began again after the long-serving leader said he would run for office again.

UN chief António Guterres said: “These storms were emergencies on top of emergencies.”

After visiting the southern African nation Guterres highlighted how it was being battered by the the triple threat of extreme weather event, Covid-19 and war.

Earlier this year there was a sharp increase in militant attacks in the country’s northern province, Cabo Delgado.

High levels of poverty and disputes over access to land and jobs have caused local tensions to rise up, while the government targets the area as of particular importance due to its rich off-shore natural gas reserves.

Fighting has broken out by the government and local insurgents al-Shabab, who are recruiting young people to fight for their cause.

Killings, beheadings and kidnappings have all risen sharply.

In one horrifying incident 50 people were beheaded in a sports field.

Mozambique’s geography make it all but certain that such unrest, fuelled by the large scale internal movement of people, will get worse in the future.

More than half of the population lives in low lying coastal areas, putting communities and key resources at risk. Increased flooding and drought threaten the agriculture sector, which employs roughly 75% of Mozambique’s workforce.

In addition to economic implications, these stressors also increase risks of food insecurity and water-related illness such as cholera.

The country ranks 27th on the Fragile State Index.