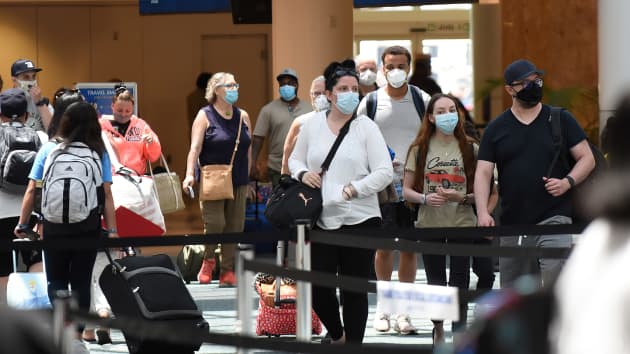 The U.S. will ease travel restrictions for international visitors who are vaccinated against Covid-19 in November, including those from the U.K. and EU, the White House said Monday.

Noncitizens visiting the United States will have to show proof of vaccination and a negative Covid test taken within three days of departure, said Jeff Zients, who is leading the nation’s Covid response efforts for the White House.

The changes will take effect in early November, which the airline industry expects will spur holiday bookings.

“They must show proof of vaccination prior to boarding a U.S.-bound airplane,” Zients said during a press briefing.

Airlines and other travel industry groups have clamored for the U.S. to lift the restrictions for months. The Trump administration had first issued the rules, which now apply to more than 30 countries, in March 2020. President Joe Biden upheld those rules in January, shortly after taking office.

The Biden administration is also tightening rules for unvaccinated U.S. citizens returning home. They will need to test one day before departure and test again after returning.

European and British officials have lifted entry bans for U.S. and other visitors since vaccines became widely available this spring, but the Biden administration hadn’t reciprocated.

Allowing more international travelers into the U.S. would have wide-ranging impacts. A ban on much of non-U.S. citizen travel has had broad effects on industries including airlines, retail and restaurants.

The Centers for Disease Control and Prevention will also require airlines to collect and provide passenger information to aid contract tracing.

“In the coming weeks, CDC will be issuing a contact tracing order requiring airlines to collect current information for each U.S.-bound traveler, including their phone number and email address,” Zients said.

Shares of American Airlines, Delta Air Lines and United Airlines rose Monday after the White House’s announcement, escaping a broader market sell-off. Those carriers have the most international service of U.S. airlines and will benefit the most from the change in policy. JetBlue Airways, which debuted its first service to London last month, also gained.

“Leisure bookings for the holidays from inbound tourist visits and non-US citizens visiting friends and relatives will accelerate in upcoming weeks,” Jonathan Root, senior vice president at Moody’s Investors Service, said in an emailed statement. “We also now expect a stronger increase in business travel by the first quarter of 2022 than would have occurred if the borders remained closed.”

There will be a few exemptions to the vaccination requirements for foreign visitors, such as for children not yet eligible to be vaccinated, according to a person familiar with the White House’s strategy, but full details of the policy have not yet been released.

The airlines cheered the Biden administration’s decision, which will open up those carriers to customers who have been restricted from flying to the U.S. since early 2020.

″U.S. airlines have been strong advocates for a stringent, consistent policy and are eager to safely reunite the countless families, friends and colleagues who have not seen each other in nearly two years, if not longer,” Nicholas Calio, president of Airlines for America, the lobbying group for the largest U.S. carriers, said in a statement.

In June, the U.S., U.K., EU, Mexico and Canada announced they would form a group to study how to safely reopen international travel.

Monday’s announcement came after the peak summer travel season but it could mean stronger demand for end-of-year holiday trips. Airlines have been using some of their biggest planes, normally reserved for international trips, for domestic routes, a trend that could quickly change if demand from abroad rises with the new rules.

Airline capacity to Europe from the U.S. this summer was down 61% from 2019, according to aviation data firm Cirium.