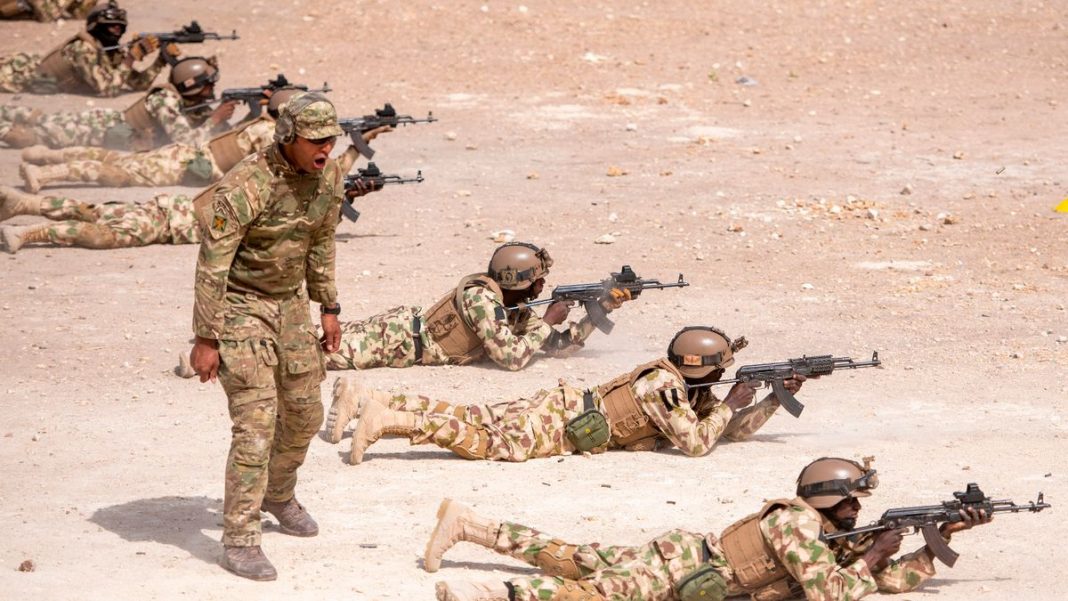 Somali special forces will be taught how to combat the growing threat from the Islamic State and al-Qaeda-linked al-Shabab which is funded by kidnappings, robberies and extortion

Hundreds of elite British troops are preparing to be sent to Somalia within months to help fight growing terrorist networks.

Infantry forces will step up a training mission to teach Somali special forces how to smash the al-Qaeda-linked al-Shabab and Islamic State threat.

British officers from an elite Army unit are already in the region making plans for the mission which is expected to launch in late Spring 2022.

It comes in the wake of the death of Tory MP David Amess, 69, who was stabbed to death in an alleged terrorist attack during his constituency surgery.

British man Ali Harbi Ali, 25, whose family are originally from Somalia, has been charged with murder after being arrested at the scene of the killing on October 15.

Sources have told the Mirror the deployment of more troops to Somalia was under discussion before the Amess death.

Small number of UK forces have been in Somalia helping with training for some time but now the operation is being stepped up.

They are training the 60th Somalia National Army Division between camps in Baidoa and the capital Mogadishu.

But more troops are being lined up to help train Somali Special Forces, who are part of Mogadishu’s “Danab” or Lightning unit.

The Daily Mirror understands highly-trained British infantry units may mentor the “Danab” on operations against al-Shabab and Islamic State.

A source told the Daily Mirror: “Senior soldiers are already in the region, mapping out where the new troops will be based and what they will be doing.

“Their mission is sensitive as although a few scores of British troops are already in Somalia, this will put a new emphasis on counter-terror operations there.

“The scouting mission has also been liaising across the border in Kenya with local counter-terror agencies about the growing terror threat.”

The source said the plans were discussed before the death of the Tory MP.

US forces have also been in Somalia for some years helping local troops battle al-Shabab, which means the “youth.”

The heavily-armed al-Shabab group, linked to al-Qaeda, has spread its influence into neighbouring countries across East Africa.

It is well-funded by kidnappings, robberies, extortion and there is also a suspicion it has received backing from corrupt officials in Eritrea.

Islamic State is also on the rise in the region.

Despite multiple Mirror sources confirming the increased Somalia troop deployment, including seeing the forward party in Somalia, the MoD tonight tried to play it down.

An MoD spokesperson insisted: “There are no current plans to significantly increase our footprint in Somalia. As standard practise, all operations are kept under review to ensure they remain operationally effective.

“Our enduring commitment to Somalia consists of 70 personnel who support the capacity building of Somali security forces by delivering training and providing equipment.”

Afghan threat from IS soars

Islamic State is expanding in Afghanistan at an even more alarming rate than previously thought.

It fears it will soon be able to attack targets outside Afghanistan.

Abu Hamza has launched a legal bid to claim back £144 of his UK benefit money.

The hook-handed cleric was ordered to pay £72 for each of the 11 terrorism counts he was convicted on in the US, where he is in jail.

But two were quashed and he wants the cash back. Lawyers warn the claim could cost US taxpayers £26,000. The move has sparked fury.

By Chris HughesDefence and Security Editor