After 396 years, the sun has set on the British monarchy’s reign over the Caribbean island of Barbados, with a handover ceremony at midnight on Monday marking the birth of the world’s newest republic.

As the clock struck 12, the Royal Standard flag representing the Queen was lowered over a crowded Heroes Square in Bridgetown and Carol Roberts-Reifer, chief executive officer of the National Cultural Foundation, made the declaration of Barbados’ transition to its new constitutional status.

Guests in the square applauded as Dame Sandra Mason was sworn in as president by the chief justice and took the oath of allegiance to her country. Hundreds of people lining Chamberlain Bridge in the capital cheered and a 21-gun salute was fired as the national anthem was played. Barbadian singer Rihanna also attended the ceremony and was declared a national hero.

“Republic Barbados has set sail on her maiden voyage,” Mason said in her inauguration speech as the first president of the country, recognising the “complex, fractured and turbulent world” it would need to navigate.

“Our country must dream big dreams and fight to realise them,” the former governor-general told those gathered for the ceremony.

A solemn Prince Charles was on hand to witness the transition. “The creation of this republic offers a new beginning,” he said in a speech to the ceremony. “From the darkest days of our past and the appalling atrocity of slavery, which forever stains our history, people of this island forged their path with extraordinary fortitude.”

“Full stop this colonial page,” Winston Farrell, a Barbadian poet said in a reading at the ceremony. “Some have grown up stupid under the Union Jack, lost in the castle of their skin.”

“It is about us, rising out of the cane fields, reclaiming our history,” he said. “End all that she mean, put a Bajan there instead.” 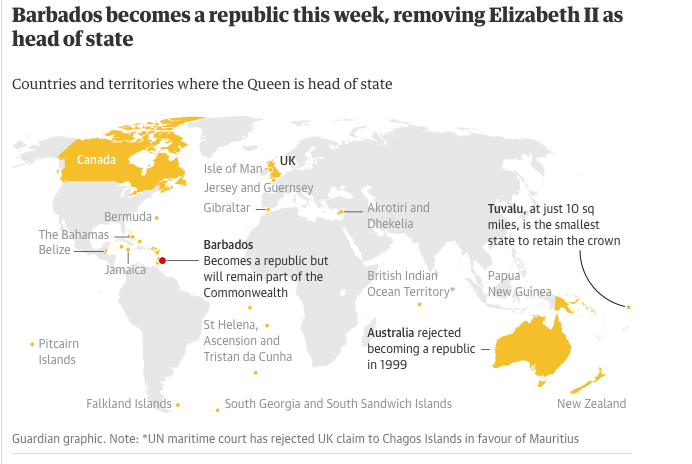 Announcing the decision to cut ties with the monarchy in 2020, prime minister Mia Mottley, who led the ceremony, said the time had come for Barbados to “fully leave our colonial past behind”, though some in the country said the moment had been long overdue.

“It cuts into your dignity as a citizen,” Sir Hilary Beckles, the country’s most renowned historian and vice-chancellor of the University of the West Indies, said of the ongoing role of the monarchy in the country.

“It reduces you psychologically in terms of being a citizen of your nation, and then you have public officials who have to swear allegiance to this sovereign who is not a part of their reality.” A comprehensive survey of Barbadian attitudes to the royal family – the early results of which were shared with the Guardian – suggested that more than 60% of Barbadians were in favour of becoming a republic, half of them enthusiastically, while about one in 10 people preferred to keep the status quo.

“A significant number of persons were not interested one way or the other,” said Cynthia Barrow-Giles, a professor at the University of the West Indies and a lead investigator for the poll, which is yet to be released.

On an island whose anglophile tendencies once led it to be dubbed “little England”, where people still drive on the left, play cricket at Kensington Oval and bathe at Brighton beach, the republic is part of a wider agenda building steam across the Caribbean to forge a future outside a British framework.

The last time a spate of former colonies in the region cut their ties with the monarchy was the 1970s at the peak of the black power era. It was amid another reckoning on race last year, after the killing of the African American George Floyd, that Barbados flagged its own breakaway from the Queen.

Barbadian leaders have mooted a republic since the run-up to independence in 1966, when the country’s first prime minister, Errol Barrow, told a British minister his nation would “not loiter on colonial property past closing time”.

But in a world still shaped by colonialism, that has proved to be a fraught task that successive Barbadian governments have avoided, seeing it either as divisive, a distraction or a source of potential disquiet in Britain – from where more than a third of tourists to the country hail.

It took until independence day in November 2020 for Mottley’s government to announce the transition, shortly before she presided over a ceremony to remove a statue of the British naval hero Horatio Nelson from a city square, over his defence of the colonial slave trade.

A planned protest in Bridgetown over the presence of Prince Charles at the handover ceremony was denied permission on grounds of avoiding the spread of Covid-19.

Other than Black Lives Matter protests, questions over the role of the Queen in Barbados may have grown in light of the Windrush scandal that saw thousands of people of Caribbean heritage living in Britain facing potential deportation, said Guy Hewitt, a former Barbadian high commissioner in London.

“Windrush would have been one of those significant events that showed the divergence between where the Queen, as the queen of the United Kingdom, and her role as the queen of Barbados, may have been irreconcilable,” he said.

The poll of Barbadian attitudes to the monarchy suggests any personal admiration for Queen Elizabeth that outlasted the colonial era has long dissipated on the island. “People are neither here nor there about her,” Barrow-Giles said.

Few of those surveyed could name any others in her family, she added, with the exception of one member. “Where Prince Harry is concerned, in terms of the royal family outside of the Queen, he has the greatest level of favourability,” Barrow-Giles says. “People like him.”

By Michael Safi in Bridgetown