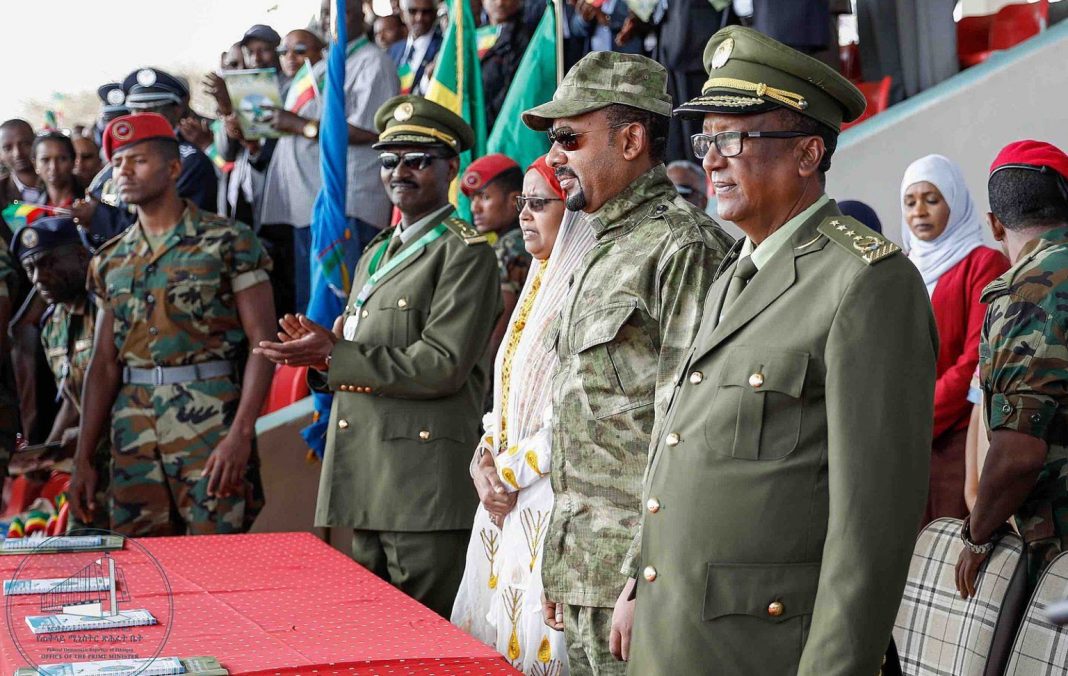 Can America save Ethiopia, Tigray, or Eritrea?

Ethiopia’s Prime Minister Abiy Ahmed went to the front to take control of the military. The dramatic maneuver won applause at home. In one video he is seen in khakis, promising viewers that “We won’t flinch till we bury the enemy and ensure Ethiopia’s freedom.”

It was a grand gesture that has both solidified Abiy’s support and encouraged enlistment in Ethiopia’s beleaguered military. However, Abiy was never known as a warrior. Indeed, he won the Nobel Peace Prize in 2019 for ending a conflict with neighboring Eritrea.

Nor do politicians taking to the field have a high success rate. In 1870, the Prussian army captured the fortress of Sedan, including French Emperor Napoleon III and the French Army of Chalons, of which he had taken effective command, triggering a revolution in Paris. In 1915 Tsar Nicholas II sought to invigorate the imperial cause by joining the army headquarters in Poland and taking command. Alas, he knew little about war and was blamed for the military’s disastrous failures, which in part led to his ouster in the revolution of February 1917. Earlier this year, Chad’s President Idriss Debry Into, an army officer who had seized power three decades ago, took over military forces combatting insurgents and was killed in battle in April. A day after preliminary election results indicated his reelection, he was said to have “breathed his last defending the sovereign nation on the battlefield.”

Abiy will need more than a little luck to avoid a similar fate. Alex de Waal of the World Peace Foundation recently concluded that “the Tigray Defense Force has comprehensively defeated the Ethiopian National Defense Force. Abiy has lost the war. One of Africa’s most professional and powerful militaries has been reduced to an assemblage of conscripts, militia, and remnants of his soldiery that resembles a fighting force but is disorganized and demoralized—and no match for the TDF.”

Last year, Abiy moved against the Tigray People’s Liberation Force, insurgents-turned-politicians who had long dominated Ethiopia. He sought to minimize their influence after he took power three years ago. The TPLF ignored instructions from Addis Ababa, which cut funding to Tigray province. The TPLF struck national troops stationed in the region, leading Abiy to launch a full-scale military offensive last November.

Despite having military assistance from Eritrea, the tide dramatically turned against Abiy’s government. Tigrayans proved to be highly motivated and effective in battle. Moreover, additional ethnic groups took up arms, at least one of which is formally allying with Tigray. Addis Ababa is now at risk, leading Abiy to declare a state of emergency. Even the well-traveled airport, home base of globe-spanning Ethiopian Airlines, might be forced to close.

The conflict is a tragedy at many levels. Ethiopia suffered under a brutal communist dictatorship of varying forms from 1974 to 1991. During much of that time, the country was at war with Tigray and Eritrea as well as Somalia. Eritrea emerged as an independent country in 1993, though periodic border wars have erupted as recently as 2018, the settlement of which earned Abiy his Nobel win. For a time, he loosened political controls in what had been an authoritarian state, but those gains were erased over the last year.

All sides are fighting with great brutality and, observers generally agree, have committed what amount to war crimes. Human Rights Watch evaluated a recent report on atrocities, concluding that the study “documents brutal sexual violence by all warring parties, but fails to acknowledge the scale of abuses, including sexual slavery, by Ethiopian, Eritrean, and Amhara forces targeting Tigrayan women. And it glosses over the deliberate and extensive destruction and pillaging of health infrastructure, and the intimidation and killing of humanitarian workers.”

The worst offender probably is Eritrea, which should be no surprise given the nature of a regime rated by Freedom House as more repressive than North Korea. The Washington Post reported that Eritrean forces “have committed among the war’s worst atrocities, including civilian massacres and rapes meant to be so violent they render victims infertile. In its sanctions announcement, the Treasury Department said that Eritrean defense forces have gone house-to-house in search of Tigrayan families to evict and men and boys to execute. Those who survive must leave behind dead loved ones or face execution.”

However, Freedom House reported that Ethiopia’s “troops have committed many of the crimes for which the United States is sanctioning Eritrea. Amnesty International reports that Ethiopian government forces and allied militias have also weaponized rape. Ethiopian soldiers have forced Tigrayan women into sexual slavery, engaged in gang rapes, and targeted Tigrayan women fleeing to neighboring Sudan.” Human Rights Watch cited a de facto blockade as well as massacres of Tigrayan civilians and more.

Although Tigray may be the most wronged party, its behavior also has been atrocious. Noted the Post: “civilians fleeing the conflict are accusing Tigrayan forces of committing a range of atrocities, including door-to-door executions, as they have widened the conflict beyond the borders of their own region. Displaced people blame Tigrayan troops for ‘killings, widespread looting and the indiscriminate shelling of civilian areas,’ Agence France-Presse reported.” Representatives of ethnic Amharas assert that millions of civilians are suffering under TPLF occupation.

In a conflict so terrible, there rarely is much outside parties can do. The Biden administration, naturally, has called for a ceasefire and sent Jeffrey Feltman to the region as special envoy, but to no avail. With his capital at risk, Abiy doubled down rather than turned to negotiation.

Sanctions are the next “go-to” measure. Cameron Hudson of the Atlantic Council advocated that Washington “sanction a wider range of individuals and entities. Potential targets could include individuals who are intentionally blocking humanitarian aid shipments; those using social media and other information platforms to incite violence and foment hate; and anyone seeking to undermine diplomatic efforts to achieve a cease-fire and long-term political settlement.” Yet penalties on individuals are more for the imposer than the imposed upon; that is, regime elites and violent militants typically are motivated more by nationalism, anger, politics, hatred, and similar factors than access to American banks and visas.

Hudson’s call to ban arms sales is better focused, though a unilateral embargo would have little impact. A United Nations prohibition, which would require Beijing’s and Moscow’s assent, would be more effective, though smuggling would inevitably reduce its impact. Moreover, the exact impact of such a measure would depend upon the combatants’ indigenous arms industries.

He also advocated penalizing Ethiopian firms involved in the war, such as the Commercial Bank of Ethiopia and Ethiopian Airlines. Yet sanctions on Eritrea have not halted that nation’s involvement. As the Washington Post admitted, “U.S. sanctions against Eritrea probably will not force Eritrean troops out of the conflict. The United Nations sanctioned Eritrea for nine years, in part for refusing to withdraw troops from neighboring Djibouti, and the country did not relent.”

Even going “all in” with secondary and financial sanctions probably wouldn’t force Addis Ababa to end the fighting. Only years of debilitating sanctions encouraged Sudan to allow secession by South Sudan, but did not end the conflict elsewhere, including in Darfur. Iran, Syria, and North Korea all withstood “maximum pressure” campaigns. Nor would economic sanctions match the ongoing challenge of military defeats and the enemy’s steady advance.

Moreover, by appearing to take sides, the U.S. would sacrifice any remaining influence and undermine any future relationship. Abiy already has inflamed nationalism and blamed foreigners; many of his people claim that outsiders and Western governments are seeking to break up Ethiopia. Coming in against Addis Ababa when it is losing would give the Abiy regime an excuse for defeat, an Ethiopian equivalent of Germany’s infamous World War I “stab in the back” myth.

Even Hudson admitted the danger: “Critics may argue that the punitive measures outlined here would disproportionally harm the Ethiopian government, further imperil bilateral relations, diminish American influence and drive Addis Ababa deeper into the clutches of Tehran, Moscow and Beijing.” Such has been the case in the past; for example, Beijing gained economic influence in Burma and Sudan when both were sanctioned by the West.

Desperation has led some policymakers to look at military options. No one, not even war-obsessed Senator Lindsey Graham, has suggested introducing U.S. troops. However, Representative Brad Sherman proposed a naval campaign to break to blockade of Tigray: “the American Navy could interrupt Eritrean commerce on the high seas at any time, and it would certainly be just to do so – as long as Eritrea blockades humanitarian aid to the people of Tigray.”

Yet there is no reason to expect such a step would cause the leadership of an isolated, secretive, and vicious totalitarian state to change course to avoid additional civilian hardship. Moreover, any U.S. blockade would have to be selective: Washington is unlikely to starve the Eritrean or Ethiopian populations in an attempt to break the siege of Tigray.

As difficult as it is for Washington policymakers to hold back, they must learn the limits of American power. There is no easy answer to the terrible multi-sided battle on the Horn of Africa. All parties share the blame, though Abiy’s government bears the greatest responsibility for expanding the war’s reach and increasing its brutality. He should accept the consequences by acknowledging defeat and seeking a ceasefire.

Doug Bandow is a senior fellow at the Cato Institute. A former special assistant to President Ronald Reagan, he is author of several books, including Foreign Follies: America’s New Global Empire.