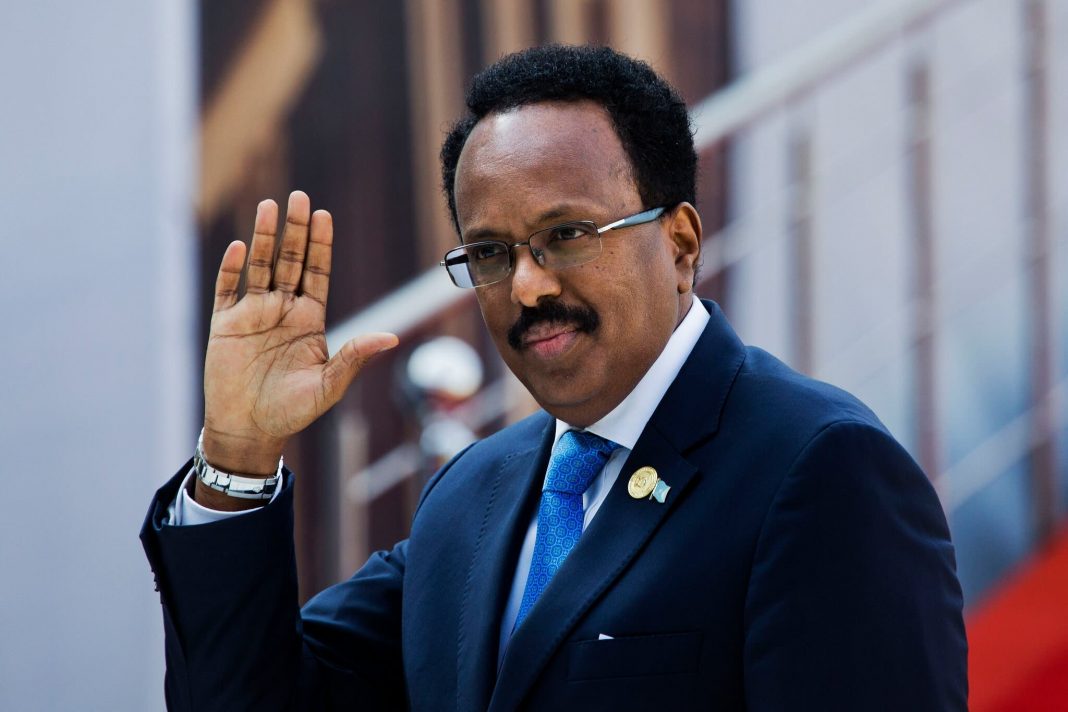 The 2016-2017 parliamentary and presidential elections, in which Mohamed Abdullahi Farmajo defeated incumbent president Hassan Sheikh Mohamud with a wide margin, represented a political moment in the history of the post-civil war Somali government for a peaceful transfer of power. The public jubilation reported in every corner of the Somali territory was unprecedented and rekindled high hope for a bright future for Somalia.

The public expected Farmajo to be faithful to his oath of office taken before the parliament, saying that “I swear In the Name of Allah that I will perform my duties honestly and in the best interest of the nation, people and religion, and that I will abide by the constitution and the other laws of the country.” The Coalition of 2017 Presidential candidates with whom Farmajo shared platform, urged him not to betray the high hope the Somali people put in his leadership. The federal president promotes National Harmony and Unity, respect of the rule of law, and represents the symbol of the national Identity. Unfortunately, not only did he betray public hope but he displayed contempt for truth, respect of the constitution, fair elections, compassion, and a democratic system of governance.

Use of violence, corruption, sham elections, and divide and rule policies has been the governing philosophy of Farmajo in his years in power, now turned into an open-ended stay in power. He became impervious to public opinions, complaints, criticism, and human tragedies, and doubled down on repressive and corrupt measures to silence opposition and critics. It appears that Farmajo’s contempt to democracy mirrors to what has been described the “Maduro Model” of Governance adopted by the modern autocrats (Taliban of Afghanistan, Military Junta of Myanmar, Afewerki of Eritrea, Assad of Syria, Maduro of Venezuela, Daniel Ortega of Nicaragua, Putin of Russia, and others ) who are “willing to pay the price of becoming a totally failed country, to see their country enter the category of failed states, accepting economic collapse, isolation, and mass poverty if that’s what it takes to stay in power.”

Recently, the United Nations has launched the 2022 Humanitarian Appeal of 1.5 billion dollars to support 7.7 million people in need of food assistance and protection. In 2017 the humanitarian appeal was 864 million dollars and the number of people in need of humanitarian assistance was estimated at 3.9 million. On that occasion, Michael Keating, former Special Representative of the United Nations Secretary-General (SRSG) for Somalia said, “the agenda for the incoming federal government of Somalia has to be affected by this crisis. And in some ways, the legitimacy of the incoming government will in part be viewed by the degree to which it comes to term with this problem and puts its weight behind solving it.”  Sadly, the humanitarian needs of Somalia doubled in five years rather than being reduced.

Farmajo didn’t appreciate the awesome responsibility of being the second president entrusted to steer skillfully forward the “failed state of Somalia,” of which foundation has been put in place during the preceding four years. The roadmap to follow has been outlined in the federal Constitution and in the international partnership and security pacts adopted at the London Conference on May 11, 2017, as well as in the agreements with the International Monetary Fund, World Bank, and African Development Bank. The overall goal was to build the institutional capacity of self-governance in less than four years. However, all planned efforts have been superseded by a gluttonous drive for a power grab that crowded out everything else.

Nevertheless, despite the intolerable political and security condition of the country, the Somali people patiently waited to exercise their fundamental right for political change in free, fair, and transparent elections by electing their representatives in the House of the People (HoP) and the Upper House (UH), scheduled to be held before the end of November 2020. The elected representatives were supposed to elect a new president before February 7, 2021.

Instead, Farmajo erected multiple roadblocks to rig elections and stay in power. First, he made the federal parliament worthless, a rubber stamp. Second, through sham elections, he installed loyalists in three Federal Members States (FMS) -Hirshabelle, Galmudug, Southwest, and appointed a loyal Governor to Benadir region, and sowed conflicts in Jubbaland and Puntland states.

Third, he putrefied the preparation of 2020-2021 federal election to ultimately stay in power in any way possible. Fourth, after grudgingly accepting an agreement on an Indirect Election Process in September 2020, he appointed Federal Implementation Election Team (FIET) filled with his sycophants and then deliberately ignored the protest of the opposition groups, civil society, and media for the partiality, the illegitimacy of FIET members and the need for immediate dissolution.

Sixth, he created paramilitary forces and personally took control of the army, police, and intelligence forces to intimidate, harass, and assassinate anyone if necessary. Seventh, he bypassed the UH and bribed the leadership and members of the HoP to rubber stamp unlawful two-year term extension in April 2021, immediately rejected. These machinations and others have irrefutably proved the unwillingness of Farmajo to hold free and fair election in Somalia.

Due to threats of rebellion in reaction to the unconstitutional 2-year term extension, on May 1, 2021, Farmajo declared the transfer of the responsibility of implementing the indirect election agreement to the caretaker PM Roble who was supposed to work with FMS Presidents and the Governor of the Benadir region as members of the “National Consultative Council (NCC).”

The majority of Somalis mistakenly believed that Farmajo had finally decided to recuse himself from direct or indirect involvement in the election process. About 2 A.M. of December 26 and 27, Farmajo issued two separate contradictory, groundless press statements signed by his communication director Abdirashid Mohamed Hashi. In the first one, he accused PM Roble of failing to complete the election in 14 months, which is absolutely a big lie because the NCC was established on May 27, 2021. It exists only seven (7) months.

In the second one, without any shred of evidence, he stated that because of suspicion of land misappropriation by PM Roble, he suspended him from his duty. The made-up claim was made by the Commander of Navy forces of the Somali National Army (SNA) Brigadier General Abdelhamid Mohamed Dirir, a close ally of Farmajo on December 20, 2021, publicly debunked in the following day by the Minister of State, former Commander of police and intelligence service General Bashir Mohamed Jama, a friend of PM Roble. Farmajo didn’t explain or identify the source of the suspicion. Land problem is a civil, not a criminal matter.

Besides the made-up claim of land misappropriation, Farmajo doesn’t have any power to suspend PM from his job for any reason at any time. Shockingly, Farmajo ordered the presidential guard to confine PM Roble in his house, prevent him from going to his office, and to take care of him if he refuses the confinement order. PM’s staff were told to go home.

He also ordered the army, the police, and the intelligence to clamp down public movement in Mogadishu and deny access to the presidential palace. Politically, Farmajo’s action was a military coup prohibited under national and international laws. He lost the legitimacy to be in Villa Somalia.

Farmajo controls NCC’s decision-making process because the Presidents of Galmudug, Hirshabelle, Southwest states, and the Governor of Benadir Region are his staunch loyalists (proxies), taking orders from him. In addition, he controls the federal (FIET) and state (SIET) election teams and the Election Dispute Resolution Team (EDRT). Therefore, Farmajo disrupts, distorts, and paralyzes the NCC deliberations through his proxies at any time and level.

Farmajo started the efforts of rigging elections in 2017. The international partners and the Somali Elite were fully aware of his sham state elections as a prelude to the rigging of the federal elections. Attempts to challenge the sham state elections have been undermined by the UN, EU, US, and UK diplomats who were strong backers of Farmajo, confirmed by the unpardonable compliance with the unjustified expulsion of the Special Representative of the UN Secretary-General (SRSG) Nicholas Haysom as Persona Non-Grata (PNG). Given the upper hand, Farmajo felt free from all constraints of accountability to the Somali people and international partners.

Not surprisingly, the successor of the expelled SRSG, American citizen James Swan and the Special Representative of the Chairperson of the African Union Commission (SRCC) for Somalia, head of the African Forces (AMISOM), Mozambican citizen Francisco Madeira opted to be in bed with Farmajo and steadfastly, unabashedly defended or covered up his abuses, transgressions, and shenanigans and unapologetically antagonized, betrayed, backstabbed, and divided the opposition, critics, and dissenters of Farmajo’ abuses and violence, sham elections, endemic corruption, and the anti-democratic foreign actors in the Somali politics.

The Somali people relied faithfully on the empty pledges of the International Partners of Somalia for promoting the rule of law, respect of human rights, and democratic governance. Unfortunately, James Swan and Francisco Madeira became notorious for presenting baseless, sugarcoated progress report on Somalia every three months to the UN Security Council. The reprehensible collusion between the diplomats of the international partners and Farmajo has blocked the advancement of Somalia’s statebuilding and democratization aspirations in the last 5 years.

Farmajo wants to continue his machinations to stay in power. Therefore, exiling Farmajo is the only way to revive Somalia’s political integrity which means the exercise of the political power consistently for public interest and not for staying in power and accumulating wealth.