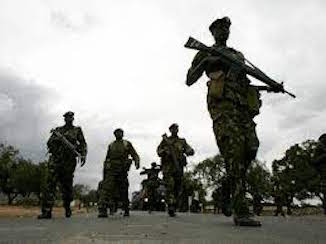 Kenyan police said Tuesday they had made four arrests following a brutal attack in a coastal region bordering Somalia that left six people dead and homes in ashes.

One man was beheaded and five were shot or burned to death in the assault on a village in Lamu County which began late Sunday.

The Lamu region has suffered violent incursions by Al-Shabaab and local authorities initially suspected the Somalia-based militants were behind the attack, though did not rule out other motives.

There has not yet been any claim of responsibility and police said investigations so far suggested a land dispute could be at play.

“The investigation is progressing on well and so far four people are in custody. More arrests will follow,” National Police spokesman Bruno Shioso told AFP.

“So far it has been established that the attack is linked to local disputes on land,” he said, adding such incidents were not uncommon in the area.

He said police were investigating whether a separate killing on Monday evening roughly 60 kilometres (37 miles) away was connected.

Police said the assailants in the earlier attack stabbed and beheaded a local elder and razed his home, and shot dead another man whose body was found on a roadside nearby.

The corpses of four other men burned beyond recognition were found with their hands bound in another location, according to a police report seen by AFP.

Lamu, which includes the popular tourist beach destination of Lamu Island, lies close to the Somali frontier and Al-Shabaab has staged cross-border attacks in the coastal region.

In January 2020, the Al-Qaeda-linked militants stormed a US military base in Lamu, destroying several aircraft and killing three Americans.

Al-Shabaab have targeted Kenya in retaliation for Nairobi sending troops into Somalia in 2011 as part of an African Union force to oust the jihadists.

Somaliland is Invited to a Kenyatta Reception for Diplomats, Piqued Somalia Walks Out

Kenya at One With Somaliland on Fire Catastrophe