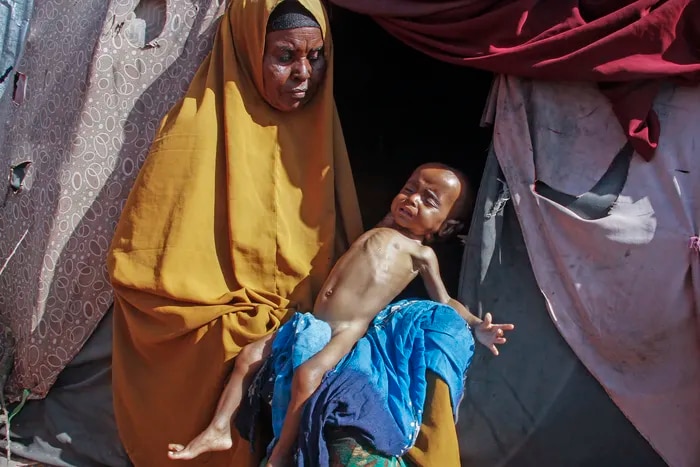 Thousands of desperate families have fled a severe drought across large parts of Somalia, seeking food and water in camps for displaced people outside the capital, Mogadishu

Sitting under the hot sun, hungry women and children await food aid in a camp on the outskirts of Somalia’s capital, Mogadishu. They have walked for days, fleeing the drought now ravaging a large part of rural Somalia.

Their growing ranks are expected to swell further in the coming months as the Horn of Africa region faces its worst drought conditions in a decade.

This week the United Nations World Food Program warned that 13 million people in the region, including parts of Ethiopia and Kenya, face severe hunger in the first quarter of 2022. Immediate assistance is needed to avoid a major humanitarian crisis, the agency warned. The Horn of Africa has long been vulnerable to drought and hunger conditions often exacerbated by armed violence.

Somalia’s government in November declared a state of humanitarian emergency due to the drought, with the worst affected parts including the south-central areas of Lower Jubba, Geddo and Lower Shabelle regions.

“The impact on families is being felt more severely this season due to the result of multiple, prolonged droughts in quick succession, a worsening security situation, desert locust infestations, soaring food prices, reduced remittances — and less money committed by donors,” the aid group Save the Children said earlier this week of the drought in Somalia.

A survey in November covering 15 of Somalia’s 18 regions found the “majority of families were now going without meals on a regular basis,” it said in a statement.

In Somalia, 250,000 people died from hunger in 2011, when the U.N. declared a famine in some parts of the country. Half of them were children.

WFP has said it needs $327 million to look after the immediate needs of 4.5 million people over the next six months, including in Somalia.

Somali leaders also have been trying to mobilize local support, and many have responded.

A task force set up earlier this month by Prime Minister Mohamed Roble collects and distributes donations from the business community as well as Somalis in the diaspora. Some of what they give feeds hundreds of families residing in camps such as Ontorley, home to about 700 families.

“There are not (many) humanitarian agencies operating on the ground and these people urgently need support and assistance such as shelter, food, water and good sanitation,” said Abdullahi Osman, head of the charitable Hormuud Salaam Foundation and a member of the prime minister’s drought task force. He more assistance is needed for the thousands of families living in camps for displaced people.

About five to 10 desperate families arrive at Ontorley camp each day, according to camp leader Nadiifa Hussein.

Faduma Ali said she hiked more than 500 kilometers (310 miles) from her home in Saakow, a town in Middle Jubba province, to Mogadishu.

“The problems I face are all due to the drought,” she told The Associated Press. “We had no water and our livestock had perished and when I lost everything, I walked the road for seven days.”

Amina Osman, a visibly emaciated woman also from Saakow, said two women with them on their journey to Mogadishu died from hunger along the way.

“We came across many hardships, including lack of water and food,” said the mother of four. “We trekked all the way from our village to this settlement. We spent eight days on the road.”

More patients with acute malnutrition are arriving at Mogadishu’s Martino Hospital, and some have died, said director Dr. Abdirizaq Yusuf. Malnutrition patients are treated free of charge, he said.

“Due to the increased cases of acute malnutrition, the hospital now employs specialist doctors and nutritionists who help those most affected,” he said. “A large number are from remote regions of Somalia and now live in (displaced people’s) camps.”

by MOHAMED SHEIKH NOR