Following a riot by prisoners at the central prison of Hargeisa, Somaliland Republic, Wednesday, a number of journalists who were covering the event were forcibly commandeered away from the site and thrown behind bars by security forces.

It was at first reported that around a dozen of the reporters fell in the police, security forces dragnet. It has been confirmed since then that nine or ten are still being held. 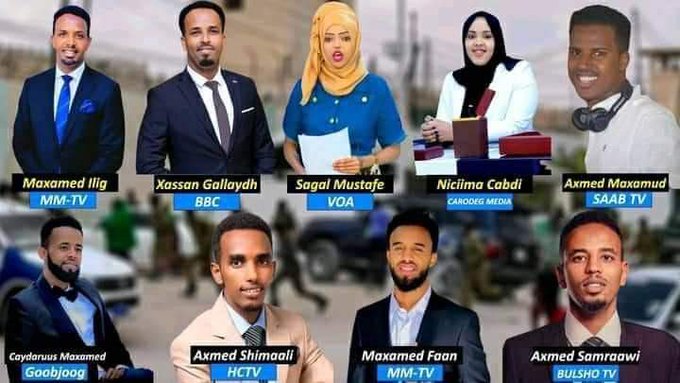 These, along with dozens more of Somaliland’s top journalists were instrumental in bringing the recent market fire in Hargeisa to world attention. Without their live coverages and hour-by-the-hour reporting, with some of them remaining on the spot for more than 24 hours, the enormity of the fire could not have been captured.

This time around, the same live coverages, cost them their freedom.

Their detention appears to have brought to the surface polarized loyalties and views – some of them so out of context in a manner reminiscent of the old police state of Somalia where militant socialists labeled everyone who did not tote their line of propaganda as anti-nationalist, a foreign spy or a saboteur.

“It is the culture of failing governments to imprison anyone who does not sing in unison with them. It was a few weeks ago that our president told the US that we are democratic, but jailing journalists will show to the world that our actions contradict our democratic claims,” Khadar Abdi, Secretary-General of the Somaliland National Party ‘Waddani’, states on Twitter.

If you’re a Palestinian politician and your tweets are supported and shared by Zionists, what does that say about your message?

Somaliland, look at the likes, retweets and Qts of any @khadarlooge tweet, why does he get such unwavering support from people who hate SL (faqash)? https://t.co/Ee00dEKK19

And the accusations and counter-accusations spread like a bushfire across all social media platforms.
The central argument on which commenters diverged views was: Was the Central Prison a security facility or not?
Pro-government voices argued that (a) the Central Prison was a security facility belonging to the Custodial Corps, and (b) Journalists should have not been filming an incident that reflected badly on the good image based on tolerance that the Republic of Somaliland was building with the outside world.
The former group cited Article 10/2 of the Somaliland Press Law No. 27/2004 which denied journalists coverage of army and security facilities ‘which can lead to enemies compromising army strategies and capability’.
This latest round of accusations closes follows behind another in which a short while back a journalist was beaten badly by an alleged secretive service unit shouting ‘what do you want of the President!’ ‘Why do you keep telling lies of the government!’ – and the like
Counter-arguments insisted that the prison was a correctional facility holding civilian prisoners and could in no way qualify as a national security facility. Another group argued that the incident in Central Hargeisa where gunfire disturbed the mid-noon siesta of many of the fasting was not that different from the inferno that engulfed Waaheen market less than a kilometer to the southeast. Both, they said were shocking incidents that were well within the limits of legitimate coverages.
What, however, blurred the lines of both arguments were some of the facts and numbers cited by some of the journalists making it appear as if two opposing forces were battling it out inside the penitentiary high walls.
That such a large number of journalists are rounded up for covering a disturbance of the peace that could have been explained fairly by authorities briefing journalists at the site a blow to freedom of expression as it is to the integrity of the whole nation.
That at least one of the said journalists is being treated for lacerations, blows and similar injuries sustained in the hands of the security forces is equally appalling.

“We are concerned by reports of 9 journalists being arrested outside Hargeisa prison. Media freedom is a cornerstone of democracy,” Lizzie Walker, the Representative, and Head of the only Western nation mission in Somaliland, the United Kingdom, sums up how an incident like this appears to the outside world.
If anything can be learned from what happened on Wednesday, it is that the country is in dire need of (a) a press and broadcasting law that ensures the rights of both sides of the camp – freedom of expression and need for safeguarding national secrets and interests; and (b) the creation of a media council independent of the government to act as an impartial arbitrator and watchdog.