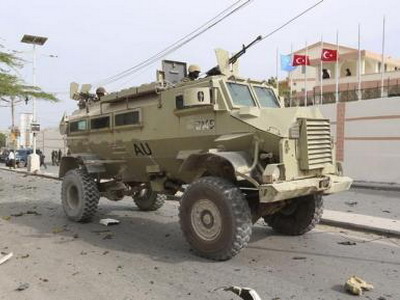 The initial mission’s mandate – which began in 2007 and ended on 31 March 2022 – was unusual. It had to contend with systemic and institutional dysfunction and security collapses in Somalia.

It also faced a major militant threat from the Al-Shabab islamist insurgency. The terror group had captured territory in central and southern Somalia in its quest for a Utopian caliphate. This included key ports in Kismayu and Mogadishu.

Since its establishment, however, the Somali government has reclaimed 80% of Al-Shabaab-held territory. There has been gradual economic and institutional reconstruction. The country has also seen significant investment is peace-building efforts. A formal political and constitutional order is slowly supplanting warlordism based on clan affiliation.

Yet, the African Union Transition Mission faces significant security and political risks. These include a resurgence of Al-Shabaab activities, a weak national security sector, dysfunctional politics and a protracted electoral crisis.

To jump these hurdles, the transition mission will need to implement a draw down of external forces. And conditions will need to be attached. It will also need to find ways to harmonise security interventions from major players. These include Turkey, the US, Britain, the European Union and Germany. It will additionally have to support the Somalia election process, and protect gains made since 2007 by ensuring no major military or political vacuums occur.

There are various structures, mandates and operational differences between the new mission in Somalia and the previous one.

The most important is the alignment of the new mission’s Concept of Operations with the Somalia Transition Plan 2021. This will see the new mission build the capacity of Somalia’s security and governing institutions for a full handover in December 2024.

Efforts to bring the African Union’s mission to an end were hampered for a long time by concerns around the stability of political and security organs in Somalia. This inevitably led to repeated annual extensions of the mission’s mandate. But after a decade, debate about winding it down gained traction.

Fatigued funding partners, including the US, UK and European Union, increasingly favoured a full exit of the mission. The Federal Government of Somalia and the United Nations Security Council also wanted an exit. They wanted security responsibilities handed over to Somalia’s national forces.

This campaign initially ran up against the regional mood and the sentiments of the five countries contributing troops.

However, concerns of financial sustainability – the mission’s annual budget ran in excess of $900 million – and the fear that “mission creep” would develops informed a hard push for exit.

As a result, in 2017, the Somalia Transition Plan was developed. This laid the foundation for a full exit through a systematic draw-down of forces.

However, Al-Shabaab surged back with an attack in Mogadishu in October 2017 that killed 500 people. And then in 2020, the country descended into a political crisis after the Somali government failed to meet constitutional electoral timelines. This situation has persisted.

In such an environment, a peacekeeping transition needs to be delicately managed. Current achievements need to be protected, with sustainable peace and stability promoted.

Electoral crisis: The political crisis caused by a flawed electoral process since 2020 is far from resolved. The elections, especially the presidential poll, threaten to throw Somalia back into instability. In April 2021, there were violent confrontations between pro-government and pro-opposition forces. This followed parliament’s attempted unconstitutional extension of President Mohamed Abdullahi Mohamed’s mandate.

In addition, the credibility and legitimacy of an election is not guaranteed in the current environment. The president and Prime Minister Mohamed Roble have regular fall-outs over the management of polling. These could be exploited by an increasingly aggressive opposition to stoke chaos.

Fragile security sector: Somalia’s security sector is a patchwork of local, regional and foreign (US, European Union, Turkish and German) trained units. It’s disjointed both tactically and doctrinally. The security forces are semi-professional, under-equipped and ill-trained to fill the gaps that would be left by the exit of the African Union mission.

It’s difficult to reform the sector to the capacity required to take charge of security responsibilities in just under three years. In addition, the Somali National Army, Somali National Police and the National Intelligence and Security Agency are fragmented along clan lines. They have also been politicised by both the government and the opposition. This risks a systematic collapse should the political gridlock degenerate into aggressive clan-based or separatist mobilisation.

Persistent terror threat: The Al-Shabaab threat is far from over. The group continues to collect revenue despite United Nations sanctions. It also wields significant ideological, political and administrative legitimacy among Somalis. This makes it impossible to adequately de-legitimise the group during the short transition window.

Al-Shabaab has infiltrated the executive and legislative branches of government in Somalia. It has occasionally overrun the national army and certain African Union military bases in ambush attacks. It is, therefore, highly possible that the group could seize certain operating bases during or after the exit of the transition mission.

It could also besiege the Somali national security architecture and mount a full-scale guerilla insurgency.

The exit of the African Union Mission in Somalia was long-awaited by the government and conflict-fatigued donors. However, there hasn’t been full consideration of the local and regional realities in Somalia. The transition is predicated on overly optimistic assumptions of the role of the new mission.

Still, gains have been made over the past decade and a half, and a careful transition may create opportunities for sustainable peace in Somalia. For this to happen, the new mission will need to avoid certain practices of its predecessor. This includes the pursuit of vested interests by some troop-contributing countries.

The new mission will need to adopt people-centered interventions that strengthen socio-political institutions, and build local legitimacy. These two aspects are critical for a successful transition.