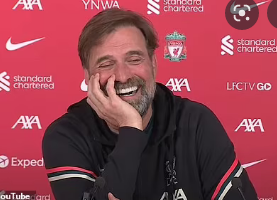 The reigning champions came into last weekend with a one-point lead over Jurgen Klopp’s men, but everything changed in the most recent set of fixtures as they managed to treble their advantage.

With Liverpool forced to settle for a 1-1 draw against Tottenham Hotspur, the door was left ajar for City to pounce with an emphatic 5-0 win over Newcastle United at the Etihad Stadium.

However, despite City having taken a massive step towards what would be their fourth league crown in five seasons, Pep Guardiola wasn’t necessarily all singing and dancing after the game.

In fact, the City coach made a number of comments about Liverpool during his post-match interviews that turned heads, essentially claiming that there was an institutional bias towards the Merseyside club.

According to the BBC, Guardiola remarkably told beIN Sports: “Everyone in this country supports Liverpool, the media and everyone.

“Of course because Liverpool has an incredible history in European competition. Not in the Premier League, because they have won one in 30 years, but it is not a problem at all.”

The comments proved to be so eye-catching that they were even put to Klopp himself on Monday afternoon as he held a press conference ahead of the mid-week Premier League trip to Aston Villa.

One reporter proceeded to read out Guardiola’s quotes out loud to Klopp and before the Liverpool boss gave a calm and considered response, he couldn’t help breaking out into laughter at the whole situation.

It’s certainly an amusing sight to watch Klopp bobbing between wide smiles and cheeky giggles as Guardiola’s snipes – made to sound a little bit silly out of context – are recounted to the whole room.

You really do get the impression that Klopp – now with some distance from the raw emotion of the Spurs draw – truly felt the absurdity of the whole situation, so be sure to check out his brilliant reaction below:

However, sadly, the laughing and grinning couldn’t go on forever as the Reds manager did indeed address Guardiola’s comments with a seriousness that looked unlikely when he initially started chuckling.

According to the Express, Klopp went on to say: “I live in Liverpool. Here a lot of people want us to win the league, that’s true. But even here, probably only 50 per cent! The other people are involved in another fight, at least until yesterday.

“As manager, I’ve had this experience recently, after a game we’re obviously influenced by the game, by the situation, stuff like this. I said after the game Spurs play like they play and they’re still only fifth. Would I say it again? No.

“I couldn’t respect Antonio [Conte] and what he’s doing and my God how he organises teams. I don’t know exactly in which situation Pep was when he said that, after getting knocked out of the Champions League it’s difficult to take but then of course Liverpool made it to the final.

“Then you have these kind of things, ‘They played Villarreal and we played Real!’ Then you say what you say. He’s right.

“I was right with Tottenham being fifth and he was right we won the Premier League only once. I’ve no idea if the whole country is supporting us, I don’t know that.

“It’s not the feeling I get actually when we go to other places and play there, it’s actually the opposite, but maybe he knows more about that than me.”