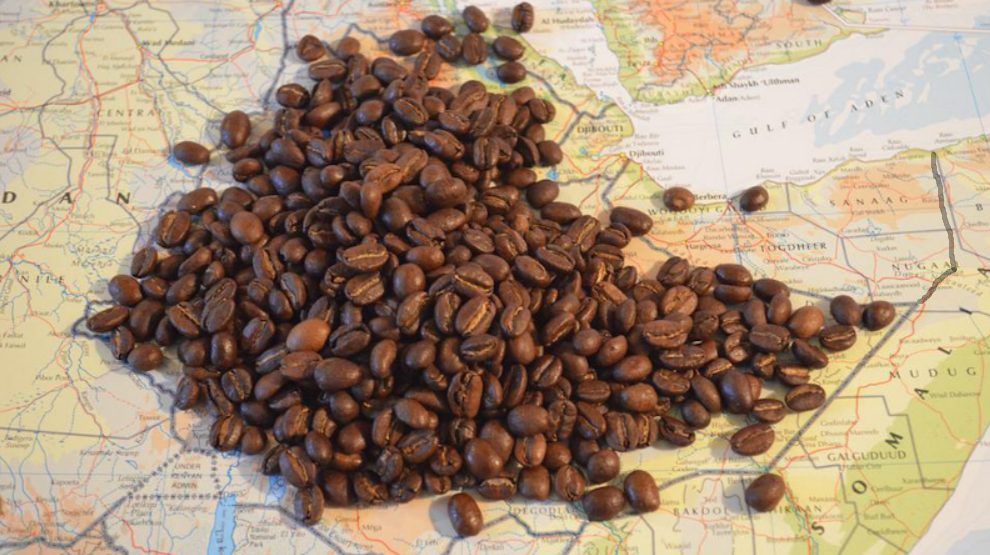 Ethiopian law prohibits the sale of export-quality coffee locally. Despite this, the country – regarded as the birthplace of coffee according to the legend of ‘Kaldi and the Dancing goats’ – hasn’t been able to control these sales. The illegal trade has grown into an organised criminal enterprise.

Ethiopia is Africa’s largest coffee exporter and the fifth largest globally. Coffee is the country’s main export commodity, generating close to 30% of its export revenue and supporting the livelihoods of over 25% of its population. The business operates on the principle of ‘consume less and export more’, with the highest quality beans reserved for foreign markets, which generate much-needed hard currency.

Exporting coffee from Ethiopia is tightly controlled under the federal government’s jurisdiction. However, for the marketing year ending 31 July 2021, Ethiopia exported 22 523 tonnes less than the previous year. Cheru Koru, the Ethiopian Coffee and Tea Authority’s director for coffee inspection and marketing, claims the illicit trade in export-standard coffee contributed to this decrease. Both licensed exporters and illegal traders sell export-standard coffee on the domestic market.

The local market is more profitable for licensed coffee exporters than the international market. Exporting coffee involves cumbersome bureaucratic procedures and expenses, such as taxes and costs for transport, packaging and storage. ENACT organised crime project sources allege that government employees in Addis Ababa are complicit in the illegal trade, altering the coffee’s documentation so that exporters can sell locally.

Illegal traders buy export-standard coffee directly from farmers and producers to sell on the domestic market. They work with brokers, intermediaries and wholesalers in Addis Ababa, who distribute the coffee to other wholesalers and retailers countrywide.

A senior agronomist and coffee farm manager in Limmu, west of Addis Ababa, who requested anonymity, said local and mid-level government officials and police commanders were also involved in the illegal trade. They ensure the transporters avoid customs inspections at checkpoints along routes from Jimma in the west and Sidamo in the south-west to Addis Ababa. Smugglers also transport coffee at night, using bribery and threats of violence to pass through customs checkpoints.

Along with corruption and threats of violence, several other factors perpetuate the illegal trade. First, there’s no consensus on whether the federal or regional governments have the mandate to regulate coffee production and sales. The federal government considers coffee a natural resource over which it has a constitutional mandate to enact laws. By contrast, states such as Oromia, Ethiopia’s largest coffee-producing region, treat coffee as a commercial product to be regulated by their own laws.

The federal government and Oromia state have different legislation criminalising the sale of export-standard coffee in domestic markets. This creates confusion for law enforcers when the crime is committed in Oromia. Cases prosecuted using regional law usually get quashed on appeal by the Federal Supreme Court’s Cassation Bench because federal law should have applied. A senior prosecutor at the Oromia Attorney General who requested anonymity said regional prosecutors were unlikely to conduct a second trial using federal law.

Even when a regional prosecutor is willing to use federal law, the case is unlikely to succeed due to procedural and resource issues. Crimes that violate federal regulations can only be prosecuted by regional high courts located in towns far from coffee-producing districts. In those circumstances, collecting evidence requires time and resources, which are scarce.

Another problem is that laws criminalising the domestic sale of export-standard coffee are self-defeating. At the regional and federal level, the legislation entitles a police or customs officer who seizes illegal coffee to a sum of money after the government sells the confiscated product. A senior prosecutor from Jimma in Oromia told ENACT that this had become the sole incentive for law enforcers to inspect and seize unauthorised coffee. Once confiscated, the criminals aren’t pursued because doing so carries no financial benefit.

The illegal trade is also sustained by its organised framework. A senior prosecutor with the Oromia Attorney General, who requested anonymity, said investigations and prosecutions involving organised criminal groups and public officials were often discontinued for political reasons.

Last, like any successful business, illicit local sales of export-grade coffee are driven by profit. The Limmu coffee farm manager told ENACT that coffee is generally sold to Ethiopian consumers at around six times the farm price, making it profitable for exporters to sell on the domestic market. It is also a lucrative business for illegal traders who still profit after bribing customs inspectors and government officials and paying off intermediaries and brokers.

Ethiopia could clamp down on the illicit coffee trade by clarifying the jurisdictional confusion between federal and regional law enforcement organs. Also, the incentive-based approach that rewards police or customs officers for merely seizing illegal coffee should be replaced with one that focuses on arrests.