China’s naval base in Djibouti is its first overseas military base, built at a cost of $590 million and has been under construction since 2016

Satellite images sourced by NDTV indicate that China’s naval base in Djibouti, on the Horn of Africa, is now fully operational and supports Chinese warships deployed in the Indian Ocean region.

China’s base in Djibouti is its first overseas military base, built at a cost of $590 million and has been under construction since 2016. It is located by the strategic Bab-El-Mandeb Strait which separates the Gulf of Aden and the Red Sea and guards the approach to the Suez Canal, one of the most critical channels of international commerce.

China’s Djibouti base “is built in a fortified way, with layers of defences which appear almost medieval, like a modern day colonial fort. It is clearly designed to withstand direct assault,” says Naval Analyst HI Sutton of Covert Shores. 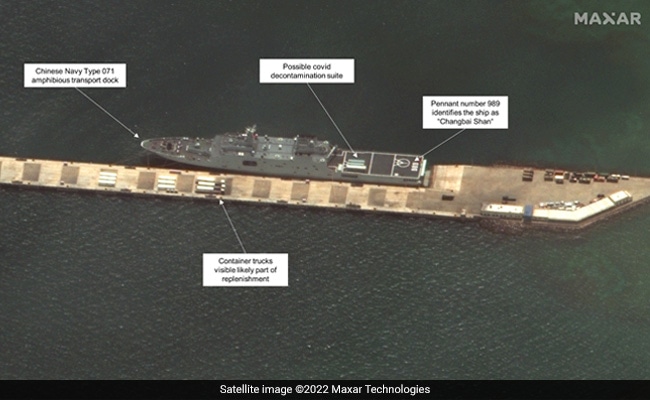 “The base appears fully operational though there is more construction work likely to take place,” says Vice Admiral Shekhar Sinha (retired). “They can positively dock ships on both sides of the breakwater. Though the width of the jetty is narrow, it is large enough to take on a Chinese helicopter carrier.”

The ship, identified as the Changbai Shan, is a large 25,000-tonne vessel designed to embark up to 800 soldiers and a combination of vehicles, air-cushioned landing craft and helicopters. It is thought to have been accompanied by a frontline Chinese destroyer when it entered the waters of the Indian Ocean this year.

“The Type-071 landing ship is very large and can carry many tanks, trucks and even hovercraft,” says HI Sutton. “A fleet of these form the backbone of China’s amphibious assault forces, although even more impressive ships are now joining the fleet. Its size and capability means that it is also used for logistics missions, transporting vital supplies.” 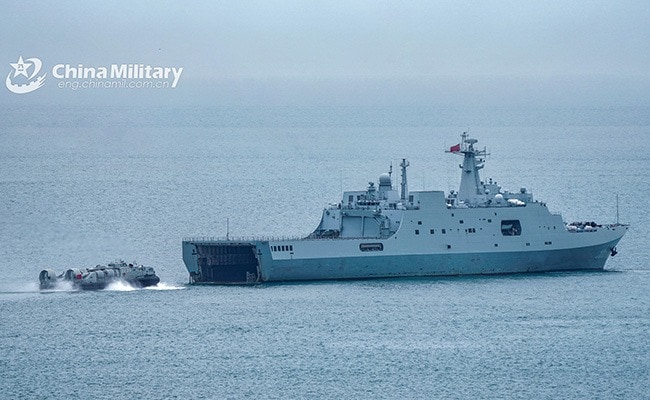 Chinese Type-071 amphibious warfare ship is of the class of flagship capable of embarking on a range of military and non-military missions. High-res here

Yuzhao-class ships are designed to operate as flagships of a Chinese task force engaged in a range of operations from amphibious assaults to humanitarian support. The Chinese Navy has inducted five ships of this class with three more in various phases of fitting-out before they are commissioned.

Images of the fully operational base in Djibouti come at a time when China has docked the 25,000-tonne satellite and ballistic missile tracking ship Yuan Wang 5 in the Sri Lankan port of Hambantota. Sri Lanka belatedly allowed China to dock the ship for replenishment after initially asking Beijing to defer its arrival after concerns voiced by New Delhi.

“With a robust tracking, sensing and communication relay system the Yuan Wang 5 is certainly capable of detecting foreign satellites, aerial assets and missile systems. This allows the vessel to support Chinese military missions far from home,” says Damien Symon, a senior researcher with The Intel Lab who has been tracking the movement of the ship as it entered the Indian Ocean.

“The presence of the vessel in the Indian Ocean region allows it to monitor space events located away from the Chinese mainland while possibly providing an extended real time communication network to its overseas bases and ground assets, such as deployments in Djibouti, peacekeeping forces in Africa and anti-piracy maritime missions.” 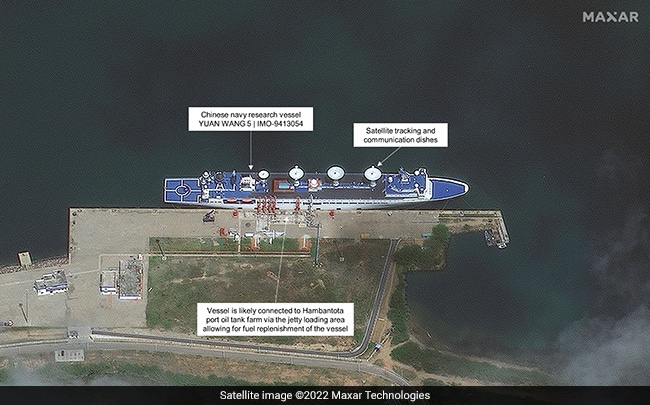 For India, there is a possibility of China being able to directly to track key satellite assets. “With the current India-China border crisis seeing no immediate resolution, the deployment of the vessel could possibly allow for monitoring of Indian reconnaissance assets that were reportedly tasked for surveillance missions around border surveillance, terrorist infiltration detection and anti-terrorist operations.”

China’s presence in both Sri Lanka and Djibouti are closely linked to its economic investments in both countries under its long-term ‘Belt and Road Initiative’. Beijing holds the majority of Djibouti’s debt which is reportedly more than 70 per cent of the gross domestic product, or GDP, of the African nation. And has effectively taken possession of the Hambantota port through the creation of a joint entity with Sri Lanka for a lease of 99 years. This is after Colombo was unable to repay $100 million annually for the $1.7 billion loan that it had taken for the construction of the port, the first phase of which was completed in 2010.

Former Indian Navy Chief Admiral Arun Prakash says New Delhi should be under no illusion about China’s maritime intentions or capabilities. “It’s now been 14 years since they established a standing patrol off the Horn of Africa. Initially there was a lot of scepticism of their ability to maintain a distant presence. But they have shown that they can do this. They have kept ships on station for six to nine months.” 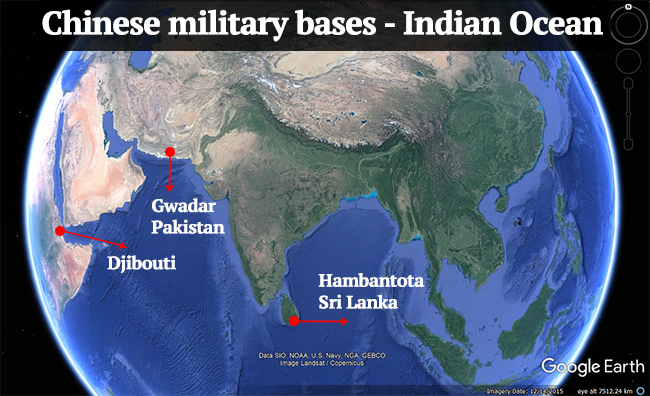 China’s presence in Djibouti is part of a detailed plan to establish its presence in the Indian Ocean, directed not just at the US Navy which has major bases in the Persian Gulf but also at the Indian Navy, the next largest in the region. The port of Gwadar in Pakistan will also be key to any further expansion in the region.

“What we see happening today is a manifestation of a well-planned, deliberate strategy of spreading their maritime influence,” says Admiral Prakash.

This strategy has already seen China operate nuclear-powered attack submarines in the Indian Ocean and may see carrier battle groups operate in these waters as well, a reality that top US Navy commanders have sounded an alert on.

35CommentsWhen asked about this in 2017, Admiral Harry Harris Jr., then the Commander of the United States Pacific Command, told NDTV, “There’s nothing to prevent them from sailing in the Indian Ocean today.”