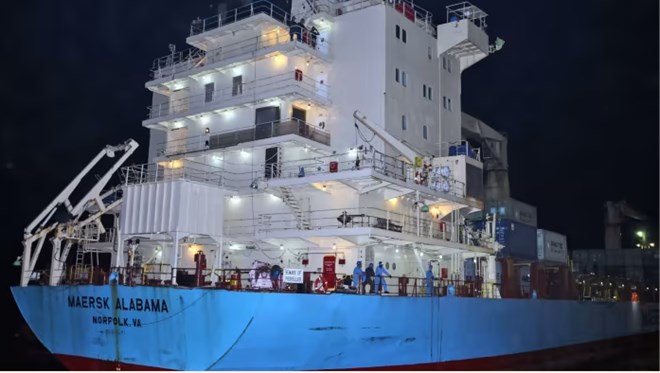 Piracy in the waters off Somalia is no longer a threat to global shipping, an industry group said on Monday, after more than a decade of efforts to prevent the attacks that disrupted trade and drove up costs.

The group of six international shipping organisations, which includes the International Chamber of Shipping (ICS) said from the start of next year the Indian Ocean would no longer be considered high risk as there had been no attacks on merchant vessels off Somalia since 2018.

“This announcement is a testament to nearly 15 years of dedicated collaboration to reduce the threat of piracy in the Indian Ocean,” it said in a statement.

A vital thoroughfare for energy exports from the Middle East to Europe, the coast of Somalia was deemed high risk after piracy and ransom demands surged from 2008 and peaked three years later. Just under 10 per cent of global seaborne petroleum trade goes through the Gulf of Aden, the waterway between Yemen and the Horn of Africa, according to the US Energy Information Administration.

In 2009, in one of the most high-profile cases, later turned into the Hollywood film Captain Phillips, a US-flagged ship, the Maersk Alabama, was hijacked by Somali pirates. The crew was eventually rescued by the US Navy.

John Stawpert, senior manager of environment and trade at ICS, said removing Somalia’s designation as a high risk area would probably reduce the number of private armed guards — who are often former servicemen — deployed on ships travelling through the region.

“It’s very strange to be standing here saying piracy is suppressed when we went through so many years of them being able to operate indiscriminately,” he said.

However, insurance premiums for voyages in the region are influenced by separate security assessments made by the Joint War Committee, a marine insurance advisory board whose guidance is watched closely by underwriters.

About a third of all daily shipping in the world passes the north-east edge of Africa, where the water narrows to a chokepoint between Yemen and Djibouti on its way to the Suez Canal and the Red Sea. Djibouti is home to a handful of military stations including from the US, France, and China’s first overseas military base, whose presence has contributed to the diminishing of piracy in the area.

Operation Atlanta, the EU’s first naval operation, and the Combined Maritime Forces, a 34-nation maritime coalition focused on counter-terrorism and counter-piracy that operates out of Bahrain, were among the naval deployments that helped combat piracy in the region.

In December, the UN Security Council said there were no successful pirate attacks off the coast of Somalia last year, noting that “joint counter-piracy efforts have resulted in a steady decline in pirate attacks and hijackings” since 2011. It added that there had been no successful ship hijackings for ransom since March 2017.

However, the UN warned that “suspicious approaches towards merchant vessels in the region were observed . . . indicating that progress achieved in combating piracy could be reversed if not consolidated.”

Maniatis, of Seagull Maritime, added that the Somali clans that had been engaged in piracy operations were now focused on smuggling weapons and people in and out of Yemen and on the coal trade with the Arabian peninsula after the risk-reward for piracy had become less attractive. “I don’t anticipate any immediate rebound of Somali piracy anytime soon,” he said, adding that “we need to see what the insurance industry will say about this.”

The Gulf of Guinea off west Africa has since emerged as the world’s biggest piracy hotspot. In 2020, 95 per cent of kidnapping incidents of ship crew members occurred while they transited through west African waters. A UN resolution in May called on countries in the region to adopt tougher measures to combat piracy.

While piracy in the Gulf of Guinea plummeted in the first half of the year, with only 12 incidents reported — down from 50 in the same period in 2018 according to the International Maritime Bureau — security insiders worry that it will not continue to be suppressed in the region.