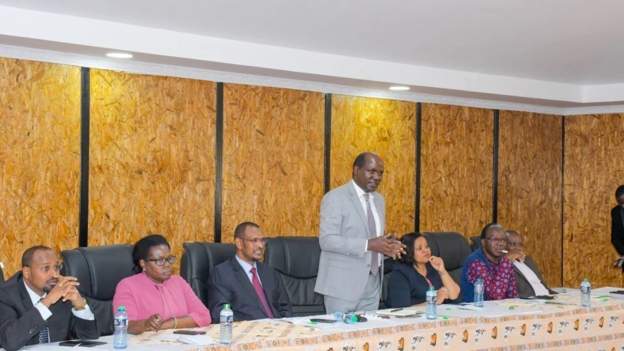 There was drama at a Nairobi hotel when a group of about 50 people raided and attempted to attack Independent Electoral and Boundaries Commission (IEBC) personnel.

The personnel were meeting at the Sarova Panafric Hotel along Valley Road when the group said to have been armed with crude weapons tried to force their way into their room.

The Commission said the attempt happened on Monday at around 8:30 pm and that the personnel were preparing responses for the filed presidential election petitions.

Witnesses said the group seemed to have been tipped off by a reveller who had spotted the officials there and mistook their meeting to be mischievous.

An alarm was raised and security responded before the group dispersed but left the personnel worried.

Some had arrived aboard motorcycles and others on private cars in a coordinated manner, witnesses said.

They noted that the group claimed the commission personnel were altering the IEBC portal.

“An organized group of goons wielding crude weapons attempted to attack IEBC personnel preparing responses to Presidential election petitions at a premise within Nairobi. However, they were repulsed by Security,” the Commission said.

An IEBC official present and security at the facility called Inspector General of Police Hilary Mutyambai to ensure that its personnel are protected.

“The Commission condemns this act of hooliganism and intimidation, and calls upon the Inspector of Police (IG) to bring to an end this blatant abuse of the Rule of Law.”

More than 50-armed police officers were later deployed at the facility to man it until the end of the petition.

Mutyambai said they are determined to ensure security for all amid protests from the commission on their safety at large after the elections.

The IEBC personnel are meeting there to respond to the presidential petitions so far filed.

On Monday, the Supreme Court received nine petitions. The commission is rushing against time to respond to the petitions.

In a notice, Chief Justice Martha Koome indicated that any election petition should be filed within seven days from the date IEBC will declare the results.

“The Supreme Court of Kenya is established under Article 163 of the Constitution and is at the apex of the Judiciary with the final authority in arbitration of disputes. Judicial authority is derived from the people and exercised in accordance with the cardinal principles spelt out in Article 159(2) of the Constitution. One of the key principles of administration of justice is that justice shall not be delayed,” the notice.

The Judiciary said petitioners will have 24 hours to serve respondents from the time of filing the petition.

Upon being served, respondents will have four days to respond to the issues raised and serve the petitioner with their response.

Justice Koome and Supreme Court Judge William Ouko have never handled a presidential election dispute since they were appointed to the Apex court last year.

Mwilu and Justices Lenaola and Wanjala were part of the Bench that nullified President Uhuru Kenyatta’s win in 2017.