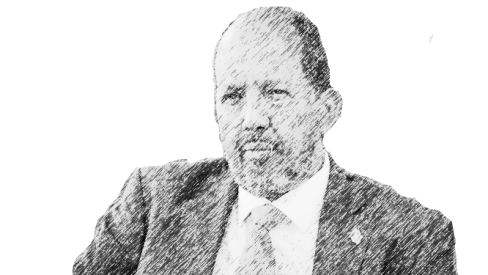 President Mohamud may be able to hold Somalia’s fractious federation together. Other grave threats faced by the country are beyond government control.

In May 2022, concluding a lengthy electoral process that began in 2020, Hassan Sheikh Mohamud was reelected president of Somalia, after holding office  between 2012 and 2017. He will need all the skills and insight he may have gained from the experience as he is facing a combination of daunting challenges amid a volatile regional and international context.

‘Peace inside, peace outside’

There had been hopes that, at long last, the Somali people would elect their president through universal suffrage. However, reflecting persisting security and political challenges, Mr. Mohamud was elected with 66 percent of the vote cast by 328 parliamentarians who had been, in turn, elected by clan delegates.

While, after a period of rising instability, these elections allowed for a peaceful change of power, doubts remain about the viability of Somalia as a state. President Mohamud – who campaigned under the slogan “peace inside, peace outside” – is known for his ability to mediate political disputes among clans and regional states with what he describes as “nomad diplomacy.” Under his leadership, some advances have been made in the state-building process by defining the relationship between the federal government and federal states.

However, two factors will restrain Mr. Mohamud’s hand in his mission. First: his previous mandate was tainted by corruption. The second: Somalia faces its social, security and political tests as a highly fragile state; it is even questionable whether it can exert its authority beyond the capital city of Mogadishu.

The first challenge the president faces is in the economy. Economic indicators are expected to deteriorate further in the short to medium term. Like other countries, Somalia is struggling with rapidly growing inflation caused by soaring global food and energy prices. The situation is aggravated further by drought. Following the government’s request, the International Monetary Fund has extended in late May 2022 its credit for Somalia until late August 2022. However, considering the conditions of the Somali economy and the regional and global pressures, this extension is mostly a palliative measure.

Rising levels of food insecurity and possibly famine result from inflation and the war in Europe. Somalia depended on Russian and Ukrainian imports for more than 90 percent of its wheat consumption. Furthermore, persistent drought severely affects the livestock sector, a backbone of the economy and the only source of income for pastoralist communities. According to the World Food Programme, 7.1 million Somalis are at risk of hunger, close to half of the 16.3 million population.

A second big problem is the resiliency of the al-Qaeda-affiliated al-Shabaab. Somalia and the African Union (AU) mounted a significant effort to neutralize the Islamic insurgence group through military means; the AU Mission in Somalia, (AMISOM) was first deployed in 2007 and by 2022, consisted of more than 20,000 troops. However, al-Shabaab has maintained its operational, recruitment and funding capacities.

The third obstacle to stabilization, perhaps the most daunting, is the country’s ruling system and power-sharing mechanisms.

It competes with state authority in rural areas, where it controls parts of the territory, provides security and collects taxes from local communities. AMISOM was recently replaced by the African Transition Mission in Somalia (ATMIS). In practice, ATMIS is not very different from its predecessor. While its mandate is due to expire in 2024, doubts remain about whether, by that time, the Somali armed forces alone will be able to provide security.

The third obstacle to stabilization, perhaps the most daunting, is the country’s ruling system and power-sharing mechanisms. For the past three decades, Somalia has met the criteria of a failed state. In 2004, in response to the tensions between different clans and the generalized mistrust attitude toward the state, the country embarked on the path of federalization.

The Somali state is now composed of five federal member states, the Benadir Regional Administration (which covers the capital Mogadishu), and according to its claims, the self-governing region of Somaliland in the Horn of Africa.

After a period of rising tensions under President Mohamed Abdullahi Mohamed, also known as Farmaajo (2017-2022), the reelection of his predecessor opened the way for improved relations between the federal government and the regional entities. However, the federalization question is far from being settled and – as seen in Ethiopia – has the potential to reignite violent conflicts. Resolving the dispute between those who vie for a centralized government and those who call for more local autonomy is necessary to complete the transition process.

Given the fragility of the security, dire economic outlook and the dramatic humanitarian situation, diplomatic and geopolitical choices made by the new executive in Somalia will matter a lot.

Like domestic policy, international relations are expected to shift under President Mohamud’s leadership. After years of tensions that peaked during the 2017 Gulf Crisis (when Saudi Arabia and the United Arab Emirates cut diplomatic ties with Qatar), President Farmaajo accused Abu Dhabi of financing the domestic opposition. Now Somalia’s relations with the Gulf state are expected to improve. The UAE was one of the first countries – along with Turkey and Eritrea – where the new president paid visits. Rapprochement with the UAE paves the way for an expansion of the Abraham Accords by establishing diplomatic relations between Somalia and Israel.

That does not mean a complete realignment of the foreign policy strategy. Relations with Ankara are expected to remain Mogadishu’s priority, given Turkey’s role as a humanitarian and development aid provider and its diplomatic support for Somalia.

After a period of tension, relations with Kenya are also expected to get better. Cooperation in the economic and security spheres and, possibly, a settlement of the maritime dispute between the two countries may be in the cards.

Somalia is still a young state; it recently celebrated its 62nd anniversary of independence. Throughout its eventful, sometimes dramatic, history, the country has strived to become a stable, united and functional state. While the political, security and economic situation has improved markedly since the chaos that followed the collapse of the dictatorial regime of Mohamed Siad Barre (1965-1991), Somalia continues to show the limitations of international intervention, peacemaking and state-building efforts.

As a new political cycle begins and considering the regional and international contexts, two scenarios should be considered.

Under the first one, Somalia will rise from a failed to a fragile state status through policies summarized in the president’s peace slogan. To strengthen the state, Mr. Mohamud will stabilize the domestic political situation through his “nomad diplomacy.” At the same time, the new executive will make progress in mending or establishing relations with other countries – such as Kenya and Israel – while maintaining strong diplomatic ties with older allies, especially Turkey and the United States. These relationships are critical as sources of desperately needed aid and economic cooperation.

Even under such an optimistic scenario, the Somali state is expected to remain fragile because of the severity of economic, humanitarian and security pressures. These factors are largely beyond the government’s control as they stem from the global volatility, donor fatigue and persistent drought in the region.

Under a second scenario, Somalia would remain stuck between the unenviable choice of either facing fragmentation and chaos or accepting al-Shabaab at the table of political negotiations. The government could be pressed in that direction by a rapid deterioration of the economic and humanitarian context and a lack of political instruments and money to mitigate its effects.

This scenario, although less likely, remains possible. Somalia may soon declare famine as food prices increase, while the region is ravaged by drought and the upcoming rainy season proves below average. People are already moving toward Mogadishu in search of relief, but they end up in camps where they remain, seemingly indefinitely, without access to sufficient food or a chance to find work.

Add to these calamities the looming global recession and the war in Ukraine that have diverted attention and funding away from Somalia, and the outlook becomes dire indeed. Such circumstances can compromise the functioning of ATMIS, which is dependent on European funding. Against this backdrop, pressure to open a political dialogue with al-Shabaab – an option that President Mohamud did not rule out – will grow more intense. Formal talks may become Somalia’s only option, opening a dangerous regional precedent.

is an African Affairs expert.