SomTribune
Home Law & Order Other Than Somaliland, No One Has the Authority to Award Oil Exploration... 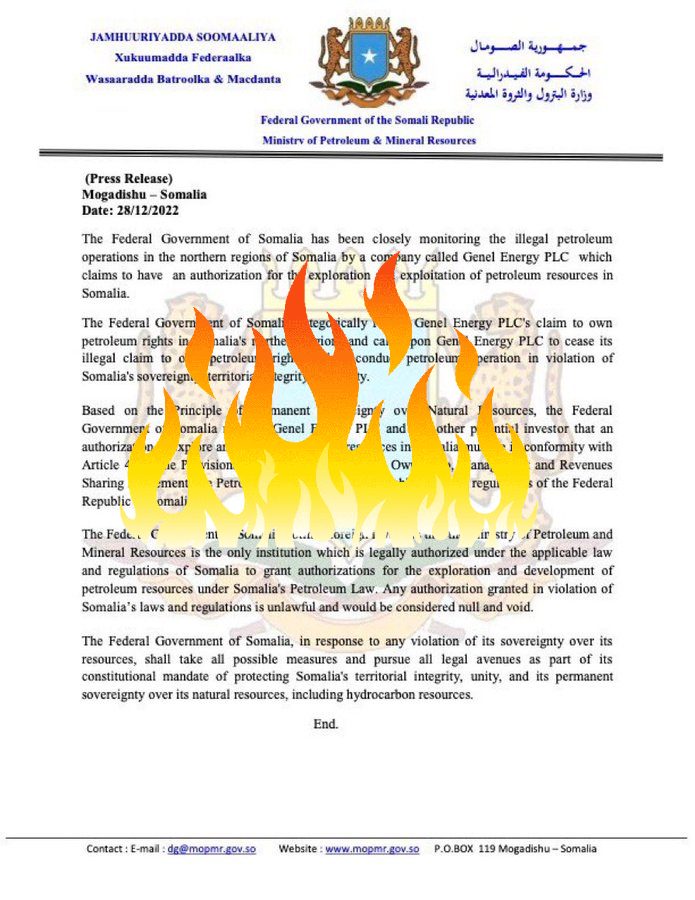 Calling Somalia’s ill-timed bluff and claim of jurisdiction over territories and resources within the Republic of Somaliland’s boundaries, the country’s ministry of energy and minerals establishes that no one other than the government of Somaliland had the right to claim authority over exploration and exploitation of natural resources.

“No one other than the government of Somaliland has the authority to claim or award an exploration license within Somaliland,” the Somaliland Ministry of Energy and Minerals said in a statement Thursday.

The statement was a direct response to a Somalia claim over Somaliland, calling it its northern regions, calling Genel Energy Plc to ‘cease its illegal claim to own petroleum rights in Somalia’s northern regions’. 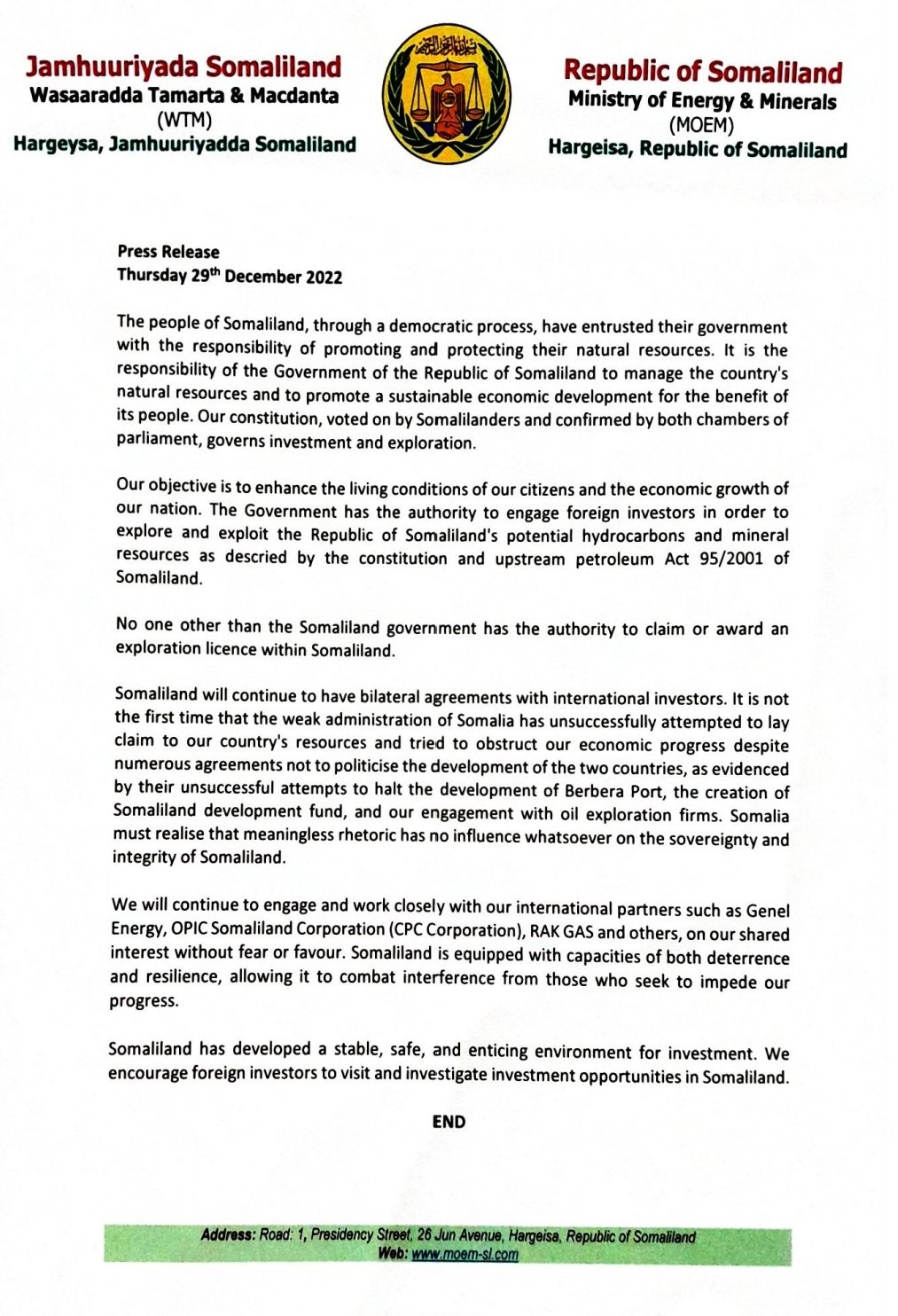 “Somaliland will continue to have bilateral agreements with international investors. It is not the first time that the weak administration of Somalia has unsuccessfully attempted to lay claim to our country’s resources and tried to obstruct our economic progress despite numerous agreements not to politicize the development of the two countries as evidenced by their unsuccessful attempts to halt the development of Berbera Port, the creation of Somaliland Development Fund, and our engagement with oil exploration firms,” the Somaliland statement highlighted.

“Somalia,” it went on to caution, “must realize that meaningless rhetoric has no influence whatsoever ion the sovereignty and integrity of Somaliland”.

The Ministry statement pointed out that, for a development engagement with investors and international parties, that ‘Somaliland developed a stable, safe and enticing environment for investment’.

“We will continue to engage and work closely with our international partners such as Genel Energy, OPIC Somaliland Corporation (CPC Corporation), RAK GAS,a nd others on our shared interest without fear or favour,” Somaliland MoEM emphasized.

On the other hand, a Somalia press statement (below) released by its ministry of petroleum and mineral resources a day earlier, claimed that the Somalia Federal government which – incidentally Somaliland was not a part of – was the only entity to hold the right of issuance of exploration licenses.

“The Federal Government of Somalia notifies foreign investors that the Ministry of Petroleum and Mineral Resources is the only institution which is legally authorized under the applicable law and regulations of Somalia to grant authorizations for the exploration and development of petroleum resources under Somalia’s petroleum law,” the Somalia statement said, intentionally omitting that those laws or all of Somalia’s other laws lawfully played no part in Somaliland since the collapse of the ill-fated merger with Italian Somalia in 1969 and again in 1991 under all major international provisos. Only Somaliland fell short of internationally approving its rights at international courts for the past 32 years granting Somalia to continue firing off ill-claims over Somaliland from time to time largely for posturing and  effect.

The Somalia claim, observers believe, draws heart from an ICJ judgment on a seven-year long wrangle with Kenya over maritime boundaries in October 2021 with each country claiming sovereignty over an Indian Ocean offshore area that was suspected to contain vast reserves of oil and gas. The ICJ granted much of the disputed area to Somalia with Kenya quickly rejecting the judgement throwing out to the winds in its entirety as it saw it as an intentional slur on its territorial integrity testing the country’s mettle.

The claim, also, revealingly coincides with unrest in the Las Anod (Laascaanood) city of Sool of Somaliland with Somalia leaders openly fueling the tensions seeing in the situation a window of opportunity to destabilize the otherwise stable republic in order to find excuses for planned military incursions – directly or disguised as clan reprisals  -and financially supported sabotage operations.

The Somalia statement and the encouraging involvement of Somalia in the Las Anod violent demonstrations, also, coincide with the US National Defense Authorization Act passing into law last week after President Joe Biden signed it. The NDAA calls for extensive exploration of Somaliland-US cooperation on a number of fields at the head of which is security.

Voter registration, too, was to begin at the city and its surroundings on the day the violent protests erupted.

Congresswoman Ilhan Omar, who hails from the Puntland Federal State of Somalia, bordering the Republic of Somaliland to the south, who vehemently opposed the passing of the Act, happened to be on a visit whose objectives were not adequately disclosed to Somalia. The Congresswoman was, in fact, in Garowe of Puntland, the day the unrest started in Las Anod, a stone’s throw away.

Together, analysts contend, the Somalia moves achieve nothing but to further confirm Somalia’s incendiary philosophies and ill-conceived ambitions that only augured ill for a stable region adding fuel to potentially disruptive flames.

Others argue that Somalia, beset by a myriad of woes of its own ranging from insecurity to giant economic hurdles, seizes on the Las Anod situation and tussle with Genel Energy to divert international attention.

Somalia being, unlike Somaliland, is largely due to a generous, bountiful international community checkbook. 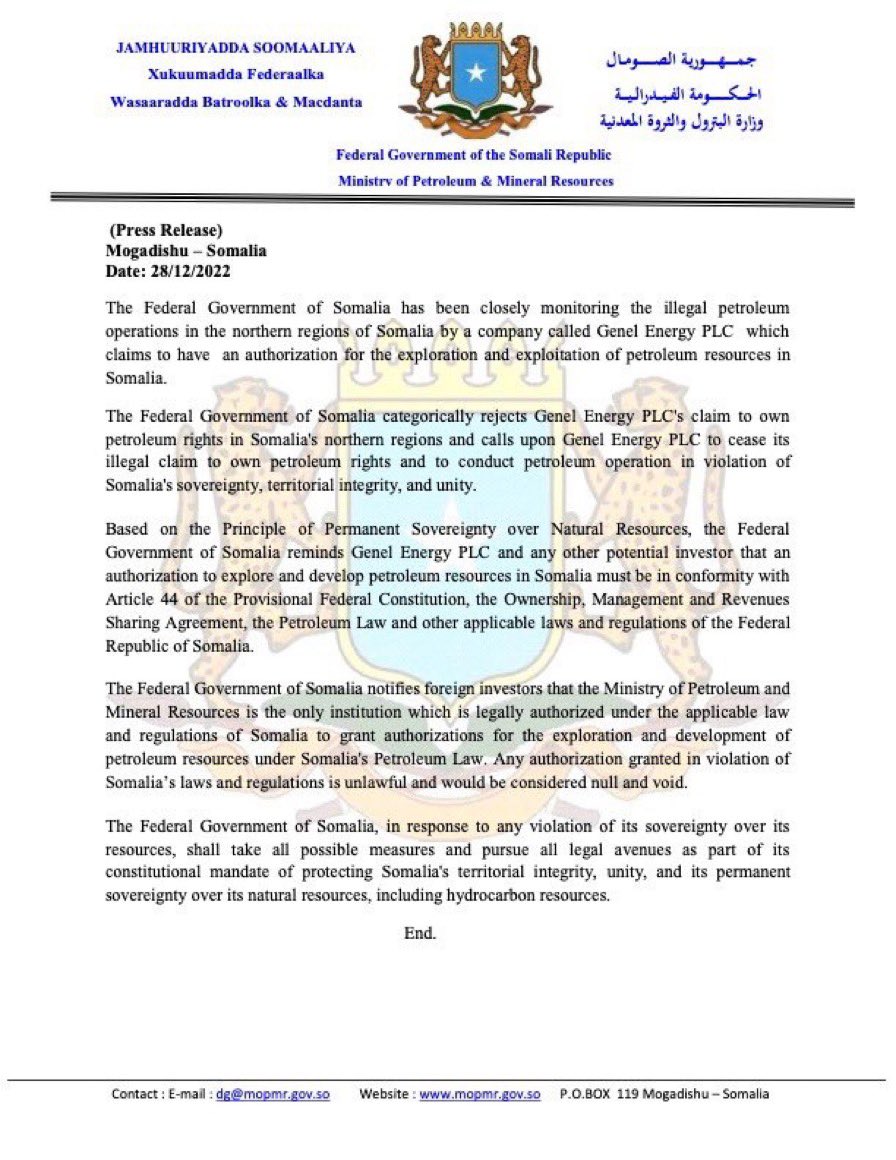