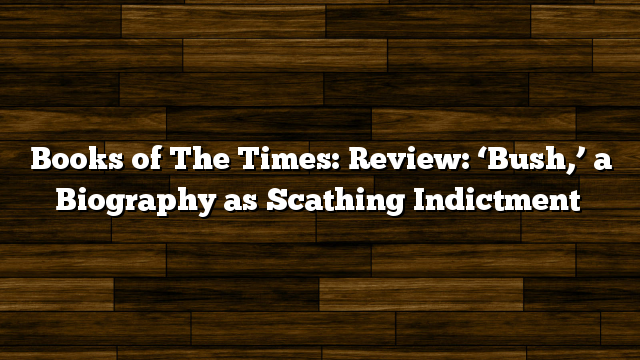 For George W. Bush, the summer already looks unbearable. The party he gave his life to will repudiate him by nominating a bombastic serial insulter who makes the famously brash former president look like a museum docent by comparison. And a renowned presidential biographer is weighing in with a judgment that makes Mr. Bush’s gentleman’s Cs at Yale look like the honor roll.

If Mr. Bush eventually gets a more sympathetic hearing by history, as he hopes, it will not start with Jean Edward Smith’s “Bush,” a comprehensive and compelling narrative punctuated by searing verdicts of all the places where the author thinks the 43rd president went off track. Mr. Smith’s indictment does not track Donald J. Trump’s, but the cumulative effect is to leave Mr. Bush with few defenders in this season of his discontent.

Mr. Smith, a longtime academic and finalist for the Pulitzer Prize, made a name for himself in part with masterly biographies of Dwight D. Eisenhowerand Ulysses S. Grant, offering historical reassessments of underrated presidents who looked better with the passage of time. With “Bush” he sticks to the original conventional assessment, presenting a shoot-from-the-hip Texan driven by religiosity and immune to the advice of people who knew what they were talking about.

While not a fresh portrait, it is one worth debating at a time when the political class is struggling to understand the meaning of Mr. Trump’s rise. Mr. Trump’s name appears nowhere in “Bush,” but it is clear the populist revolt that propelled him to the verge of the Republican nomination had its roots in Mr. Bush’s presidency, so much so that he easily overcame the former president’s brother Jeb. Mr. Trump rejects much of what George W. Bush stood for, from the war in Iraq and more forgiving immigration policies to free trade and the very notion of compassionate conservatism.

As a biographer, Mr. Smith makes no comparisons with today’s Republican leader, but he sides unmistakably with those who see Mr. Bush’s presidency in the darkest shades, if often for radically different reasons. (Mr. Smith abhors waterboarding terror suspects, for example; Mr. Trump wants it resumed.) 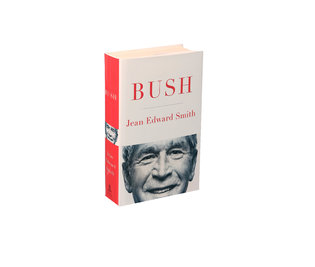 Mr. Smith leaves no mystery where he stands on Mr. Bush’s place in history. The first sentence of his book: “Rarely in the history of the United States has the nation been so ill-served as during the presidency of George W. Bush.”

The last: “Whether George W. Bush was the worst president in American history will be long debated, but his decision to invade Iraq is easily the worst foreign policy decision ever made by an American president.”

In between are more than 650 pages of fast-paced if harsh biography. In this telling, Mr. Bush’s religious piety took on messianic fervor leading him to turn democracy promotion into a mission from God. He didn’t listen to the generals and diplomats. He badly bungled the response to Hurricane Katrina. He presided over the diminution of American values by authorizing torture and bugging.

“Believing he was the agent of God’s will, and acting with divine guidance, George W. Bush would lead the nation into two disastrous wars of aggression,” Mr. Smith writes. “Bush’s personalization of the war on terror combined with his macho assertiveness as the nation’s commander in chief,” he adds later, “were a recipe for disaster.”

The value of Mr. Smith’s account is not original reporting but a thorough assimilation of the existing record. Mr. Bush declined to speak with him, as he has with other authors since leaving office. Mr. Smith spoke with both Dick Cheney and Donald H. Rumsfeld, but for the most part relies on the existing body of literature, for a complete history of Mr. Bush’s life.

One notable exception does not actually involve Mr. Bush. In a footnote, Mr. Smith reveals that David H. Petraeus invited him to dinner at the Cosmos Club in Washington after his extramarital affair with Paula Broadwell forcedhis resignation as C.I.A. director. Mr. Petraeus evidently was mulling a comeback. “How did Ike handle the Kay Summersby affair?” he asked.

“Much of the rest of the meal was devoted to my explaining how Eisenhower had put the affair behind him and successfully run for president in 1952,” Mr. Smith reports. He adds that he asked Mr. Petraeus whether the Obama administration had taken advantage of his affair to rid itself of him. “He smiled, but did not reply,” Mr. Smith writes.

Mr. Smith is more approving of his main subject in moments where Mr. Bush follows his original campaign doctrine of compassionate conservatism. The former president gets high marks for his No Child Left Behind program — intended to improve education, especially for minority students — as well as for expanding Medicare to cover prescription drugs and for leading an ambitious fight against AIDS in Africa. Mr. Smith credits Mr. Bush for saving the economy through his bold and counterintuitive intervention after the financial crash of 2008.

He presents a president who, for all his flaws, was usually gracious and warmhearted, who disdained the sort of divisive bashing that Mr. Trump favors and who went out of his way to make Barack Obama’s transition successful. He rejects the caricature of a president who simply did what his vice president told him to.

Mr. Smith’s fundamental critique is his belief that Mr. Bush overreacted to the terrorist attacks of Sept. 11, 2001. “The events of 9/11 were tragic, but scarcely catastrophic,” he writes. That led Mr. Bush, in his view, to advance policies that were not justified by the actual danger.

The Patriot Act, he writes, “may be the most ill-conceived piece of domestic legislation since the Alien and Sedition Acts of 1798.” In labeling Iran, Iraq and North Korea an “axis of evil,” Mr. Bush “had spoken without weighing the consequences.” Mr. Bush’s refusal to face up to the fact that Iraq had no unconventional weapons “suggests a willfulness that borders on psychosis.” His second-term Inaugural Address making democracy promotion his major goal “must rank as one of the most ill-considered of all time.”

Mr. Smith takes this indictment further than others by criticizing even the decision to go to war in Afghanistan, suggesting that it was a mistake to conflate the Taliban with Al Qaeda. He, of course, has the benefit of hindsight. Even if he is right, few if any leaders in either party at the time argued against the invasion. And what is often overlooked is how Mr. Bush evolved over time and modified his approach to the point that Mr. Obama kept many of his national security policies after taking office.

But if Mr. Bush feels bruised by Mr. Smith’s evaluation, he can commiserate at Kennebunkport, Me., this summer with his father. In 1992, Mr. Smith published “George Bush’s War,” castigating the first President Bush for Operation Desert Storm’s expulsion of Iraqi troops from Kuwait.

He scorned the 41st president for personalizing world politics, accused him of dissembling and screening out expert opinion and going to war against Iraq mainly because he wanted a fight — all themes that repeat in “Bush.”

Ultimately, the elder Mr. Bush’s reputation has grown with time despite this assessment — to his chagrin, partly because of comparisons with his son. The younger Mr. Bush now has to hope for the same — and may be able to count on comparisons with Mr. Trump to make him look better with time.