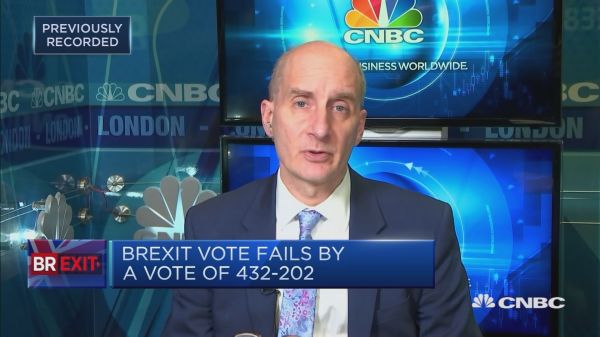 As the world awaits U.K. Prime Minister Theresa May’s next move after her Brexit deal failed to obtain parliamentary approval, some politicians from the country’s biggest opposition party believe a second referendum is now increasingly likely.

“The critical issue is now that she’s been defeated in the House of Commons, what does Theresa May do and I think, there’s only one way she can really go now — and that’s towards a referendum to give the people a chance to sort out this crisis,” Andrew Adonis, a Labour member of parliament who previously served as U.K. transport minister and education minister, told CNBC on Wednesday.

Labour officially want to push Brexit through despite swathes of the party considering themselves to be pro-EU. It tabled a no confidence vote against May, who is the head of the ruling Conservative Party, on Tuesday after her proposed Withdrawal Agreement lost by 230 votes. The deal details how Britain should exit the European bloc by end-March.

Labour leader Jeremy Corbyn is hoping May will lose the leadership vote, which will pave the way for a general election that Labour is likely to win. But many political analysts and some Labour politicians believe May will survive the no-confidence motion, unless Conservative lawmakers vote against their own party leader.

An EU flag flutters next to the statue of Winston Churchill outside the Houses of Parliament, ahead of a vote on Prime Minister Theresa May’s Brexit deal, in London, Britain January 15, 2019.
Despite her defeat in the House of Commons, the U.K.’s lower house of parliament, “there is no immediate threat to May’s position,” Mujtaba Rahman, Europe managing director for political consultancy Eurasia Group, wrote in a note. May is expected to remain in power as the Democratic Unionist Party (another opposition group) and the Conservatives who voted against her Brexit deal will support her, Rahman said.
If May survives Corbyn’s no-confidence vote, she will have to put forward an alternative Brexit strategy next week, which will be subject to further debate in Parliament. But because there is no form of Brexit that will be supported by both Conservative and Labour, Corbyn will likely support the idea of a second vote on whether Britain should give up its E.U. membership, according to Adonis
Another referendum is the “most likely course,” Adonis said. Given how divided parliament is, a referendum is the most realistic option for lawmakers to agree on, as opposed to another Brexit agreement, he continued.
Assuming May wins the no-confidence vote, the big question is whether Corbyn will move forward on a referendum next week or wait until the end of March, Adonis said. He believes the results of a second referendum will overwhelmingly see the U.K. remain in the E.U.

— Correction: This story has been updated to accurately reflect the Labour party’s stance on Brexit.