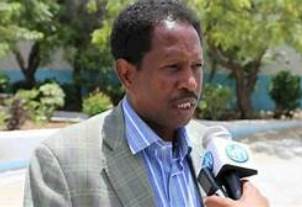 Mogadishu Mayor, Abdirahman Omar Osman, has warned former warlord Muse Sudi Yalahow that his days are numbered and that he can no longer hold the country at ransom.
The mayor said that Yalahow had refused to clear the government land and deployed forces on it despite a directive that he vacates the property earmarked for embassies.

“A day is coming when perpetrators of crimes will be prosecuted. nIt is unfortunate that today, there are people who are claiming to have possession of title deeds of Marino camp,” he said.

There has been a standoff and tensions between Mogadishu`s local government and Senator Muse Sudi Yalahow over land said to be belonging to Somali marine forces.

The directive by the Mayor that the senator vacates the property follows a move by the government to repossess all public land that had been grabbed during the anarchy that followed the collapse of the government in 1991.

The senator has maintained that the property was given to him as part of a ceasefire deal.