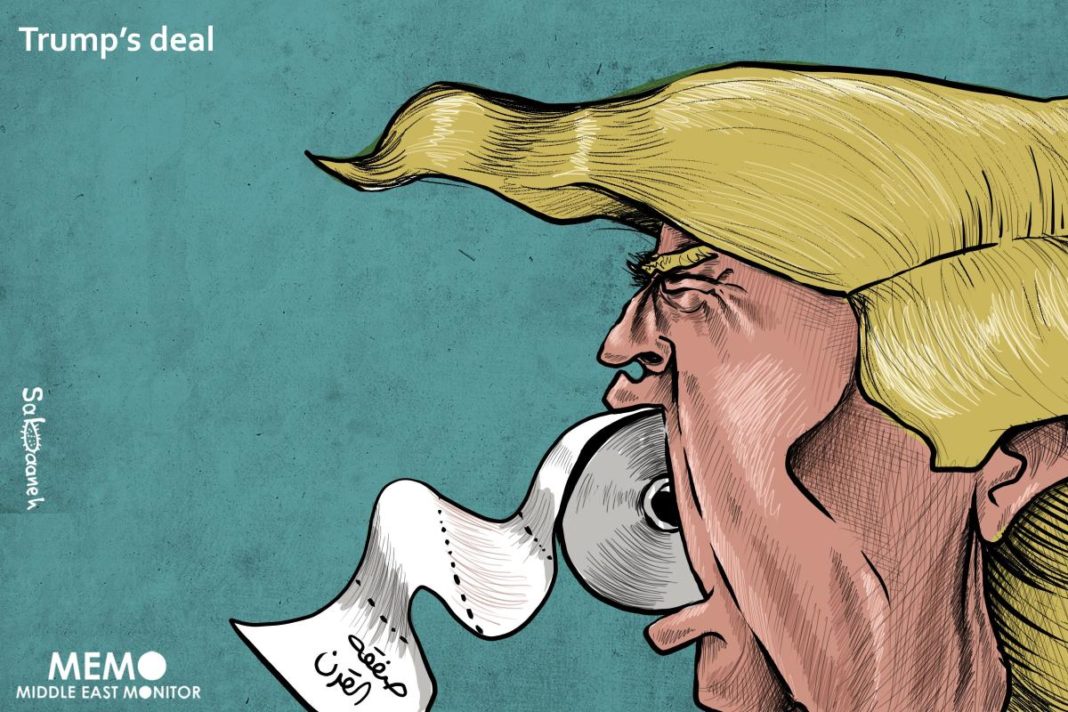 The main points of US President Donald Trump’s much-derided plan for the Middle East, the so-called “deal of the century,” were leaked by a Hebrew-language news outlet in Israel yesterday. Israel Hayom published the main points of the deal from a leaked document circulated by the Israeli Foreign Ministry.

The US has said it will reveal its deal after the Muslim month of fasting comes to an end in early June.

The main points of the agreement put together by Trump’s son-in-law, Jared Kushner — who has extensive interests in Israel and its settlements — and proposed by the US administration are as follows:

A tripartite agreement will be signed between Israel, the PLO and Hamas, and a Palestinian state will be established that will be called “New Palestine” and will be established in the occupied West Bank and Gaza, with the exception of the settlements. Israel would release Palestinian prisoners gradually over the course of three years under the deal.

The settlement blocs in the occupied West Bank, which are illegal under international law, would form part of Israel.

Jerusalem will not be divided but is to be shared by Israel and the “New Palestine” with Israel maintaining general control.

The status quo at the holy sites will remain and Jewish Israelis will not be allowed to buy Palestinian houses and vice versa.

Partition of Jerusalem? Let my people in! – Cartoon [Sabaaneh/MiddleEastMonitor]

Egypt will offer the new Palestinian state land to build an airport, factories and for agriculture which will service the Gaza Strip. Palestinians will not be permitted to live on this land.

A highway would be built to connect the Gaza Strip to the West Bank 30 metres above Israel. Funding for the project will mainly come from China, which will pay 50 per cent of the cost, with South Korea, Australia, Canada, the US and EU each paying a ten per cent each.

The US, EU and Gulf states would fund and sponsor the deal for five years to establish the state of “New Palestine”, the leak claims.

This would be at a cost of $6 billion a year; the majority of which -70 per cent – would be paid by Gulf states, with the US contributing 20 per cent and the EU ten per cent.

When the Arab World sells the Holy City – Cartoon [Sabaaneh/MiddleEastMonitor]

“New Palestine” would not be allowed to form an army but could maintain a police force.  Instead, a defence agreement will be signed between Israel and the “New Palestine” in which Israel would defend the new state from any foreign attacks.

Upon signing the agreement, Hamas will hand over all its weapons to Egypt. The movement’s leaders would be compensated and paid salaries by Arab states while a government is established.

Elections are expected to be held within one year of the establishment of the “New Palestine” state.

All borders between the Gaza Strip and Egypt and Israel would remain open to people and goods and Palestinians would be able to use Israeli air and seaports.

READ: ‘Deal of the Century’ does not entail win-win equation

The Jordan Valley will remain in Israel’s hands and a four-lane toll road will be built through it.

If Hamas or any Palestinian bodies refuse this deal, the US will cancel all of its financial support to the Palestinians and pressure other countries to do the same.

If, on the other hand, Palestinian Authority President Mahmoud Abbas signs the deal but Hamas and Islamic Jihad do not agree to it, a war would be waged on the Gaza Strip with the full backing of the US.

However, if Israel refuses the deal the US would cease its financial support. The US currently pays $3.8 billion a year to support Israel.

Everyone is waiting for the “deal of the century” and its aftermath. All that has been heard about it are partial leaks of the American plan that has been cooking for a long time. Its announcement has been postponed several times, the most recent postponement was because of the Israeli elections last April and the fear that it would have a negative effect on Benjamin Netanyahu’s chances of winning. Instead, the administration of US President Donald Trump supported him by giving him the gift of the American recognition of Israel’s annexation of the Golan Heights. Now, Netanyahu and the Israeli right-wing has won the election and Israel is ready to welcome the American plan. Therefore, the American administration is expected to announce the plan soon.

Based on the leaks of the deal of the century, and based on the words of the American president’s advisor and son-in-law, Jared Kushner, who is mainly responsible for the drafting of the American plan, this plan/deal is based on increasing economic advantages for Palestinians and security for Israel, as he told Time magazine. Therefore, the security reference for the entire area will be in the hands of Israel, regardless of what the settlement resulting from the American plan will look like, as explained by Israeli journalist Zalman Shoval in Israel’s Maariv newspaper.

He talks about the economic advantages for the Palestinians, reminiscent of Netanyahu’s “economic peace”, which he spoke about in the past, in order to exclude the main political issues, through the equation of peace in exchange for the economy. This does not address the national rights and Israel’s occupation of Palestinian territories. Kushner told Time that negotiations based on the two-state solution failed, meaning that the Palestinian state as a right for the Palestinians is not part of the future American deal. This is because if this administration believes the two-state solution failed, it will not re-engage in fruitless negotiations that will end in failure, at a time when it believes its plan is implementable and does not require negotiations. This is why it has and continues to work hard to receive the approval of the Arab parties in advance before the deal is proposed.

Erekat: ‘Deal of the Century’ does not entail win-win equation

Of course for the American administration to see the two-state solution as a failure does not mean it will propose a one-state for two nations solution, as this is something the American administration will not even consider. It seems that the entire project will revolve around a political entity with partial sovereignty under complete Israeli control, as Israel will be tasked with the security of the area. Therefore, it is in control of the Palestinians’ security as long as they constitute a part of Israel’s internal policy.

Therefore, it is only natural that the plan will include Israel maintaining its settlement blocs in the West Bank and it is not unlikely for the American plan to stipulate the annexation of the settlement outposts to Israel, which would constitute America’s recognition of this annexation. This would be only one of the precedents established by the current administration in a short time, including the recognition of Jerusalem as the capital of Israel and recognising Israel’s annexation of the Syrian Golan Heights. We do not know how the American plan will address the Gaza Strip, currently under Hamas control. Will the situation be dealt with through the PA, Hamas, or Egypt? What economic incentives will be offered in light of the current situation and will we hear talk of a new Singapore in Gaza again?

We also do not know how two additional issues will be addressed in the plan, i.e. Jerusalem and the Palestinian refugee issue. The American administration made a decision regarding the first issue when it recognised Jerusalem as the capital of Israel, and therefore, it may look for a capital near Jerusalem, in Abu Dis for example and declare it as the capital of the new Palestinian entity. As for the refugees, their fate seems known, either settlement, or re-settlement in the best case scenario. According to the leaks, Israel’s recognition of the Jewish state will be a pre-condition to achieving a solution.

It is clear that the deal of the century is close to the Israeli vision of the solution. Despite this, it is not certain that Israel will agree to it, and it is possible that it will stall considering that the proposed issues need negotiations. In this case, it may engage in additional negotiations for another 25 years, that is if the Palestinians and Arabs even agree to the deal of the century.

Weaponising anti-Zionism to drive through the ‘deal of the century’

Israel knows that there is no Palestinian partner that can agree to such an unjust solution, not even President Mahmoud Abbas, who the Americans are trying to fool into agreeing to the American plan as a means to rescue him from the worsening economic conditions caused by the Americans. The US cut its funding to the UNRWA and even significantly decreased its aid to the PA as a pre-emptive exploitative move to force it to accept the deal of the century. The US is dealing with the Palestinian cause as a business deal forced on the PA and other Arabs have agreed to it because there is no other game proposed in the region and therefore those who are desperate must agree to the unfair deal, which, in this situation, is the PA.

According to Trump’s history of extortion in other models, such as Mexico, the NATO countries, the Gulf states, etc., it is likely that this policy will also be adopted to punish the Palestinians for refusing the deal. In doing so, the American administration will be giving Netanyahu’s government even more gifts, as it considers this government to be “a peace dove” in the region, while the Palestinians are considered ungrateful for the American generosity and have rejected the peaceful solutions offered to them. Therefore, they deserve the punishment, which will include even more American support from Israel. Israel will see this as the perfect opportunity, given this absolute US support and the region’s preoccupation with its internal concerns, to annex the settlement outposts in the West Bank to Israel. This will be supported by the US, as confirmed by the American measures taken before the deal of the century in the case of Jerusalem and the Golan Heights.