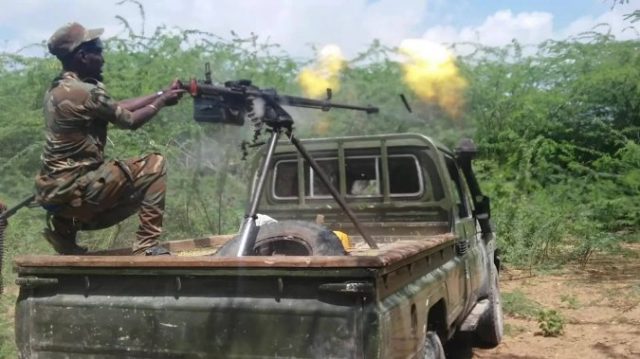 Each side claimed victory but it has been confirmed that the SNA was hard-put to defend its posts to prevent the fighters from overrunning them as planned.

The Group also claimed they killed 4 UPDF soldiers outside Qoryooley of the Lower Shabelle falling under the Southwest Federal State of Somalia earlier in the morning today.

The day before, Saturday, the militants attacked another outpost of the 27th battalion of the SNA in the Middle Shabelle came under heavy attack.

According to General Mohamed Ahmed ‘Tredishe’, the commander, they lost four soldiers to the attack on their garrison at Haji Ali village.

Al Shabaab, on their part, claimed they killed 7 soldiers and inflicted heavy damages on the vehicles and buildings at the army post.

Obviously countering claims of the Somalia army propaganda machine that, along with AMISOM troops and AFRICOM providing aerial support, the SNA was taking over areas formerly controlled by Shabaab fighters by the day, the militants have, of recent, mounted more and more raids on army and other vital points to expose the weakness of the international community supported hulk of a ‘government’ in Mogadishu.