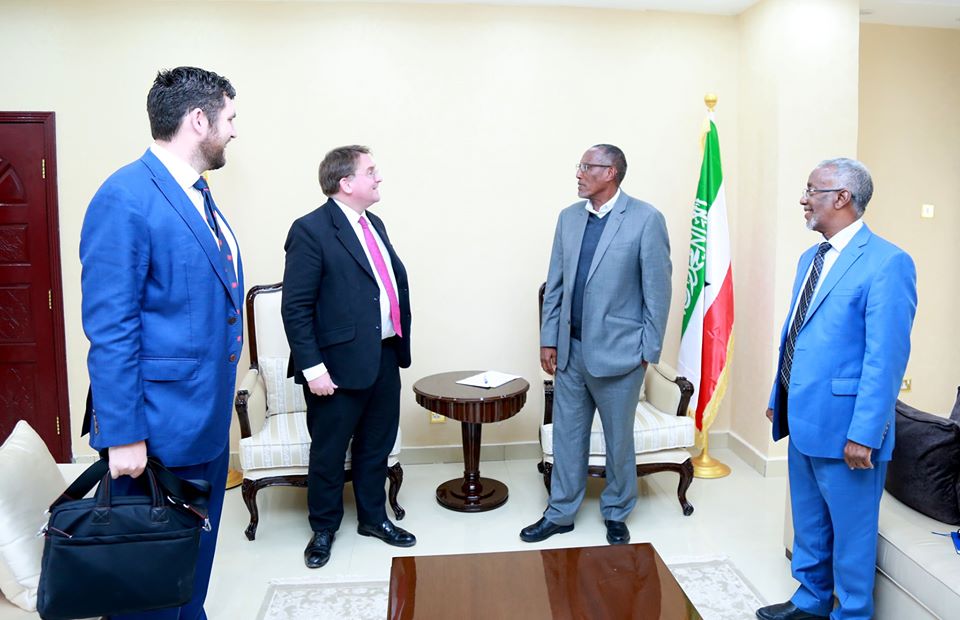 Ambassador Ben Fender of the United Kingdom to Somalia and Somaliland, concluding a visit to the Republic of Somaliland, expressed hope that support for proposals the voluntary mediation committee set forth to break a political, election-related stalemate in Somaliland, continues across the spectrum.

The Ambassador, in a tweet he posted, expressed pleasure to see wide support for the proposals the VMC put to the political parties and the government.

“Clear that there is very wide support for the Cttee’s proposals,” he stated.

Ambassador Fender added that he hoped ‘all sides can help turn them into reality’.

Seeing old friends in Hargeisa. Positive talks on elections (and much else!) with the President, opposition, Chief Justice, Mediation Cttee and civil society. Clear that there is very wide support for the Cttee’s proposals. Hope all sides can help turn them into reality. pic.twitter.com/9LJ4rh3MGi

The president tweeted that the meeting focused on ‘ a wide range of issues including Somaliland and UK ties, upcoming elections and Education sector’.

Among the Committee’s tension-breaking proposals were that the old national electoral commission members be recalled and that the controversy-surrounded present set is dissolved.

Following a recent meeting His Excellency the President of the Republic of Somaliland, Musa Bihi Abdi, had with Ambassador James Swan, the Special Representative of the UN Secretary-General, on January 10 2020, the government announced that unless the commissioners resigned on their own volition, there was no way which the government could legitimately disband them so soon after they were sworn in.

During his visit, ambassador Fender held meetings with the different stakeholders of the Somaliland electoral process, including the ultimate adjudicator of constitutional differences, the Chief Justice, civil society representatives and political parties besides the government.

One of the visit highlights, which delighted a great number of the capital residents, was a visit the Ambassador made on one of the poorer domiciles of Hargeisa, Daami, where some minority groups predominantly resided.

Listening to elders and young people from the Gaboye community in Dami, Hargeisa. A humbling reminder of the hardships faced by some minorities, their resilience and desire to contribute, and the need for truly inclusive development. pic.twitter.com/g7GV3bXoLV

Reflecting the positive reaction which the visit left behind, a subscriber tweeted:

Hugely successful visit in #Hargeisa by UK Ambassador Been fender ! Thank you for the fantastic job And unlimited support for the democratic process in #Somaliland pic.twitter.com/d2n8OXD5e6

Not all, however, applauded the often fruitless discussions international delegates hold with the political stakeholders of Somaliland, including the government.

Not only are people unhappy with the detail-lacking bland statements which tail such meetings but with, also, the carbon-copy platitudes and calls for Somaliland to observe this or that laced with underlying, vague threats of ‘lest..lest..’ Somaliland had to risk a setback to the development partnership with the ‘international community’.

At least one citizen tweeted:

So loud behind a gated community in #Mogadishu. Quiet as a mouse when you're in Somaliland.

On the whole, the visit of the British Ambassador was seen as a catalyst of the sputtering democratic processes leading to hoped for parliamentary and local councils elections in Somaliland within 2020.