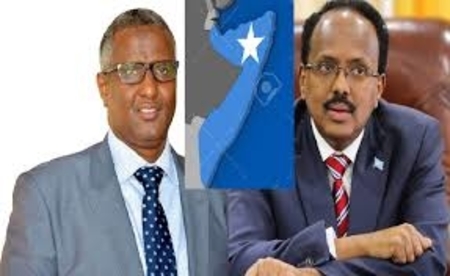 Several members representing Somaliland in the Federal Parliament of Somalia have accused President Mohamed Abdullahi Farmajo’s government of intent to delay the 2020/21 elections in the country.

Some of the members say the government has been seeking their support in a plan to delay the elections and threatening to replace them if they fail to cooperate.

Suspicions regarding the government’s 2020/21 election strategy have grown in recent days, with leading political figures in the country, including former presidents, openly accusing President Farmajo of planning to hold on to power after his term ends.

Today, former Information Minister Dahir Mohamud Gelle, who is himself said to be preparing to run for the presidency, urged the president to resists the temptation of staying on in power after the end of his mandate.

“Hanging in the office of the president is a photo of former President Aden Abdulle Osman [Aden Adde, first president of Somalia], an expression of the President Farmajo’s wish to follow on the footsteps of the founder of our republic. What if Aden Adde extended his term by one or two years? Would he still have remained a role model?” said Gelle.

Yesterday, opposition politician and leader of the Wadajir party, Abdirahman Abdishakur, warned of consequences should the president delay the 2020/21 elections.

Reacting to the postponement of a parliamentary session on election preparations, the Wadajir party leader accused leaders in Villa Somalia of intent to rule the country by force.

“Villa Somalia wants Parliament to join the Hobollada Waberi Musical Troupe and to move its sessions to the National Theatre. Villa Somalia also says it will bring to an end the several regional states and opposition parties that are still resisting their rule,” the leader pointed out.