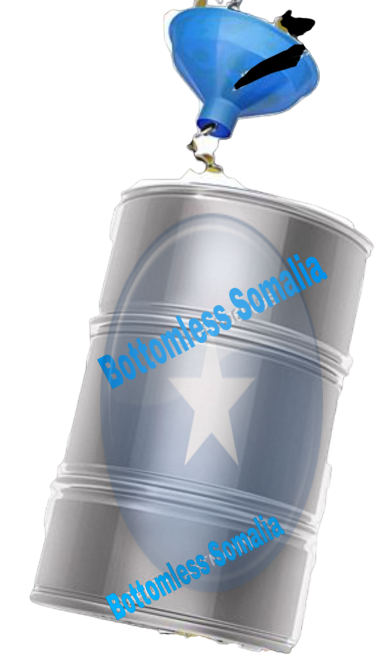 A good government may, indeed, redress the grievances of an injured people; but a strong people can alone build a strong nation.”

Legend has it that there was a Mental Health Institution in the coastal city of Berbera in Somaliland. The institution which housed people suffering from various mental health issues was short on the kind of healthcare professionals that are expected to run this kind of facility.

Using the adage “necessity is the mother of invention”, the community used their ingenuity to tackle the mental health crisis. They came with a creative way to gauge the sanity of the people who were being checked into the facility. Several bottomless barrels were placed in the institution and everyone who is checked into the facility was asked to fill one of the barrels with water.

Those with severe mental health problems continued to fill the bottomless barrel and were kept in the facility for eternity; those with moderate issues figured out the futile exercise after a while and were eventually let go; and those with mild conditions recognized the trick right away and were not admitted.

As cruel as this practice might be, it is a fitting analogy of the international community’s engagement with the government of Somalia and their reluctance to validate Somaliland’s inalienable right to sovereign nationhood.

When the military dictatorship collapsed almost thirty years ago, the international community used every trick in the books to recreate Somalia in their own image without understanding the dynamics of the social and cultural nuances of the Somali people. From Operation Restore Hope to UNISOM and AMISOM initiatives that followed, Somalia is no better today than it was when the international community rushed to salvage its hapless people. The only difference is that tens of thousands of lives are lost, and billions of dollars are embezzled and wasted.

The international community ignored a warning sign after a warning sign that things were not heading in the right direction but still chose to continue with the same policies and rules of engagement. On the other hand, experts in good governance, both domestic and international, continued to raise red flags about the merits of propping up a government which is not of the people, by the people, and for the people.

As a matter of fact, individuals who raised concerns about the direction that Somalia was heading were ostracized. For instance, the Special Representative of the Secretary-General for Somalia and Head of the United Nations Assistance Mission in Somalia (UNSOM), Nicholas Haysom, was declared persona non grata in January 2019 when he raised concerns about the fraudulent elections and the violence that claimed over fifteen lives in the South West Federal State of Somalia. The only lesson learned was that the doctrine of persona non grata does not apply to, or in respect of, United Nations personnel, which happened to be an embarrassing gaffe on the part of the Somali government.

Michael Rubin, a prominent scholar with the American Enterprise Institute (AEI), wrote extensively about Somalia and the engagement there of the international community. He indicated that “the United Kingdom is the second largest provider of Official Development Assistance (ODA) to Somalia, just behind the European Union (EU). The United States (US) and other Western countries also contribute billions of dollars to prop up the beleaguered administration in Mogadishu.”

Mr. Rubin highlighted that, while the Western countries are primarily its lifeline, the Somali government continues to cut clandestine deals and give sweetheart resource concessions to China. He pointed out that the U.S. has increased its contribution to Somalia to more than $900 million, after several years of giving at least $500 million. Mr. Rubin on many occasions implored the US government to ask Somalia why they leased their country to China if they want U.S. support. He added that Somalia receives even more from the international community and asked whether there is any metric by which Somalia has improved in proportion to money received? Security? Territorial control? Economy? Education?

In fact, there are genuine concerns that the Somali government has already fallen victim to China’s debt-trap diplomacy; a policy where the Chinese government offers huge loans to some African states and then allows that loan to be swindled by corrupt leaders. Once indebted economies fail to service their loans, they are pressured to support China’s geostrategic interests and are also coerced to sign huge concessions in their resource management sectors to the Chinese government.

While the West, whose Official Development Assistance (ODA) is the lifeline that is sustaining the dysfunctional Somalia administration are clearly frustrated with Mogadishu, they still continue pouring cold hard cash into a government that Transparency International, which is a global civil society organisation leading the fight against corruption, consistently rates as the most corrupt government in the world.

Just recently, the Acting Deputy Representative of the United States to the United Nations, Ambassador Cherith Norman Chalet, released a statement which is a damning indictment of the United State’s fruitless efforts to stabilize the situation in Somalia. She told the Middle East Monitor that her country had spent nearly $3.5 billion to restore Somalia’s security over the past two decades, without achieving any results.

The resources that the international community maintains to pour into bolstering Somalia’s corrupt administration continues to have the exact opposite effect and thus, the analogy of the continuation of the perpetual filling of the bottomless barrel at the mental health institution in Berbera that I started this article with.

If anything, the international community’s ineptitude emboldened Villa Somalia to drive the country deeper into a quagmire. It also bolstered the arrogance of the Mogadishu administration. For instance, Somalia’s international partners expressed outrage over the circumstances that surrounded the recent removal of Prime Minister Hassan Ali Khaire from office but stopped short of imposing any kind of sanctions.

The E.U. vice president Joseph Borrel said that the vote did not adhere to parliamentary rules. In a statement he contended that “regrettably, the developments in the House of the People of Somalia represent a setback for Somalia and the confidence of the European Union in the progress of Somalia.”

Similarly, the United States asserted that “the U.S. Embassy regrets the actions of the President and Lower House of Parliament to withdraw confidence in Prime Minister Ali Hassan Khayre and his government, which heightened political tensions and undermined the ongoing process of dialogue and negotiation between the Federal Government of Somalia, Federal Member States, and other key stakeholders.”

Essentially, both the E.U. and U.S. affirmed that “the procedures under which a motion of no confidence in the cabinet was passed did not meet minimal constitutional requirements.”

This is a blatant expression by some at the highest echelons of the Mogadishu administration that they are intent on continuing their corrupt practices;  persist to undermine the country’s provisional constitution and institutions; and engage the unethical members of the so-called House of the People whose votes on important matters are traded like stock market shares.

A stark contrast to the Somalia situation is a nation called Somaliland that lies to the north which gained its independence from Britain but entered a hasty, but voluntary and nonbinding union with Somalia, which was then a territory that is under Italian Trusteeship. The nationalistic atmosphere that prevailed in British Somaliland, the Pan African movement and the enthusiasm that abounded the continent in the year of African independence (1960), coupled with the lofty ideal of laying a foundation for Greater Somalia convinced the people of the British Protectorate to support the unification that happened between the two territories sixty years ago. Unfortunately, the people of Somaliland watched and lived through the horrific legacies of the failed union that have had such a destructive impact on the people of Somaliland.

Somaliland reclaimed its sovereignty and broke away from Somalia in May 1991. It charted its own course and, in the process, avoided much of the conflict experienced by Somalia. It established an independent government which utilized a hybrid type of governance that is unique in the region and fulfilled the requirements for statehood as laid out in the 1993 Montevideo Convention on the Rights and Duties of States.

Michael Horton, a foreign policy analyst who has written for numerous prominent publications, penned a very interesting article entitled, “Somaliland Breaks Ranks and Defies China”, that was published in The American Conservative on July 15. He asserted that unlike Somalia, which has received billions of dollars in aid over the last two decades, Somaliland largely relied on its own resources. Mr. Horton added that this has fostered independence and resilience that influence the way Somaliland does everything from conducting foreign policy to successfully combatting terrorism. He pointed that defying China and pursuing a relationship with Taiwan is the latest example of this independence.

“Instead of supporting a country that achieved a high degree of stability in a troubled region, the U.S. continues to spend hundreds of millions of dollars supporting the government of Somalia”, Mr. Horton contended.

Against this backdrop, it is indeed unconscionable that the international community would continue filling a bottomless barrel just like someone who is mentally deranged would perpetually continue with the same kind of exercise.

For Somaliland, however, there appears to be a light at the end of the tunnel. Some in the international community are warming up to the fact that the country’s commitment to freedom, democracy, justice and the rule of law requires the attention that it deserves.
Governments from all over the spectrum have stablished diplomatic relations with Somaliland and exchanged representative offices with the country in recent years. The list includes South Africa, Gambia, Guinea, Ethiopia, Uganda, Djibouti, Kenya and most recently Taiwan. There are also missions from the United Kingdom, the United Nations, Turkey and Denmark.

It is high time that the international community step up to the plate and welcome Somaliland, once again, to the community of nations as an equal partner just as they did when the country gained independence from Britain sixty years ago.

By  Mohamed A. Suleiman