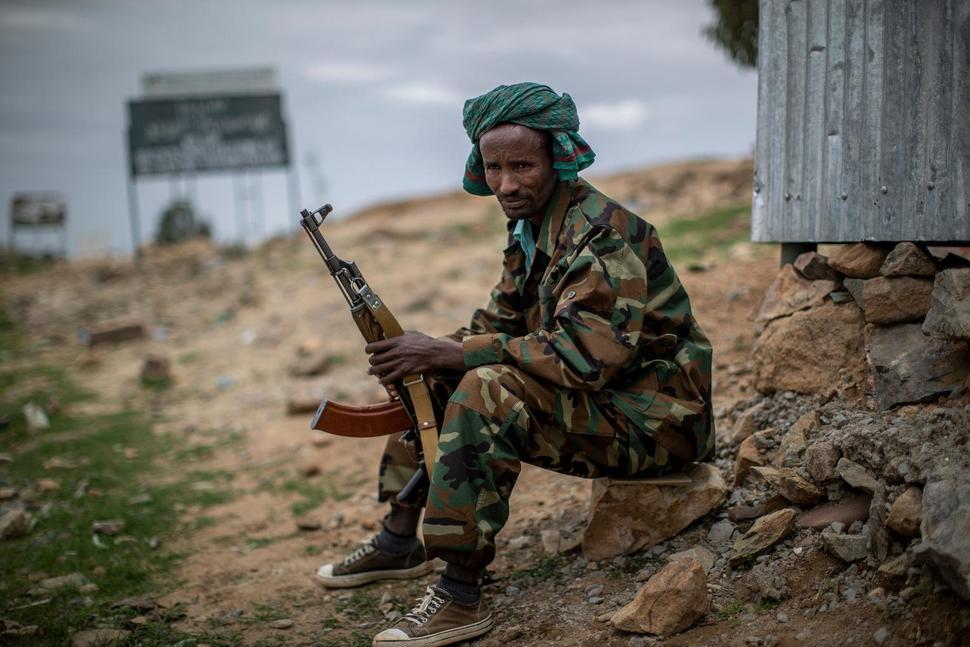 Ethiopia’s spreading Tigray conflict faces a dangerous escalation as an Amhara regional official says Amhara forces will launch an offensive on Saturday against Tigray forces who have entered the region and taken control of a town hosting a UNESCO World Heritage Site.

Ethiopia’s spreading Tigray conflict faced a dangerous escalation Friday as an Amhara regional official said Amhara forces will launch an offensive on Saturday against Tigray forces who have entered the region and taken control of a town hosting a UNESCO World Heritage Site.

“This is the time for the Amhara people to crush the terrorist group,” Sema Tiruneh, the Amhara region’s head of peace and security, told the regional state-affiliated Amhara Media Corporation. “Everyone should come forward and defend themselves.”

In response, Tigray forces’ spokesman Getachew Reda told The Associated Press that “we’ll extend a warm welcome.” The conflict threatens to destabilize Africa’s second most populous country, where thousands of people have already been killed in the nine-month war.

In a phone interview, Getachew said Tigray forces have crossed into the Amhara region, and the Afar region, in recent weeks in an attempt to break the blockade that Ethiopia’s government has imposed on Tigray. Hundreds of thousands of people face famine conditions, and the United Nations and United States this week sent high-level officials to Ethiopia to urge more access for aid.

“We have to deal with anyone who’s still shooting,” Getachew said. “If it takes marching to Addis to silence the guns, we will. But I hope we’ll not have to.” Civilians shouldn’t fear, he said in response to allegations by ethnic Amhara that the Tigray forces have carried out attacks.

“We’re not after Amhara territory or the people of Amhara. … As long as they are not shooting at our people, we have no problem,” Getachew said.

Separately, Ethiopia’s foreign ministry warned that the Tigray forces’ incursion into Amhara and Afar “is testing the federal government’s patience and pushing it to change its defensive mood which has been taken for the sake of the unilateral humanitarian cease-fire” currently in effect. The incursions have displaced some 300,000 people, it said.

Ethiopia could “deploy the entire defensive capability of the state” if overtures for a peaceful resolution to the conflict are not reciprocated, the statement said. The prime minister donated blood this week for the military and urged Ethiopians to do the same, following on military recruitment rallies in the capital and elsewhere.

Ethiopia declared the cease-fire in late June during a stunning turn in the war, as its military retreated from Tigray and the resurgent Tigray forces retook key towns and walked into the regional capital, Mekele, to cheers. The conflict erupted in Tigray in November after a falling-out between Prime Minister Abiy Ahmed and the Tigray ruling party that had dominated Ethiopia’s government for nearly three decades. Since then, thousands of people have been killed.

A new offensive by the Amhara regional forces would go against the federal government’s command: “All federal and regional, civil and military institutions are ordered to respect the cease-fire,” Ethiopia said in its declaration in June.

While the United Nations and United States raise the alarm about the Ethiopian government’s continuing near-complete blockade of the Tigray region and its 6 million people, the Tigray forces have vowed to secure the region and pursue its “enemies.” They have said the prime minister needs to go as one of several preconditions for talks.

“I personally would want him to go, but it’s not for us to topple him,” the Tigray forces’ spokesman said of the prime minister. “We’re not interested in occupying the corridors of power in Addis.”

Despite international pressure for an immediate cease-fire by all parties, Getachew said the Tigray forces in talks with partners have rejected the idea of holding “discreet talks” with Ethiopia’s government.

“If Abiy wants peace, he has to come out in public, he has to lift the blockade,” the spokesman said.

Getachew also confirmed that the Tigray forces’ aim in the Afar region is to control a crucial supply line to the rest of Ethiopia from neighboring Djibouti, on a major shipping lane. He called it “part of the game,” saying people in Tigray are starving. “It’s not to spite the other parts of Ethiopia,” he said. “We’ll cut off supply lines but we’ll allow civilian supplies, won’t worry.”

In their most visible offensive yet, the Tigray forces on Thursday entered the Amhara town of Lalibela, a UNESCO World Heritage Site for its rock-hewn churches. While one resident told The Associated Press they arrived peacefully, Amhara regional spokesman Gizachew Muluneh on Friday said the “terror group” that entered the town is being “routed” by the public and the Ethiopian army. “Several of them have now surrendered,” he added.

Ethiopia’s government earlier this year declared the Tigray People’s Liberation Front, or TPLF, a terrorist group instead of a political party.

UNESCO on Friday expressed concern about the expansion of the conflict into Lalibela.

The conflict has strained living conditions for millions of Ethiopians, and more across the country now fear it will affect them.

“There’s serious suffering in Tigray. (The Tigray forces) had an opportunity to stop the military offensive,” Tewodrose Tirfe with the Amhara Association of America told the AP. “Instead, they kept on pushing.”

Ethiopia’s prime minister repeated his commitment to the unilateral cease-fire just days ago, U.N. humanitarian chief Martin Griffiths told reporters on Friday after his meeting with Abiy. “I have no reason to doubt that at all,” Griffiths said.

But regional forces vowing a new offensive could be another matter.

As the Tigray forces push on, they have become the focus of increasing warnings from the U.N. and U.S. amid pleas for an immediate cease-fire and peace talks without conditions.