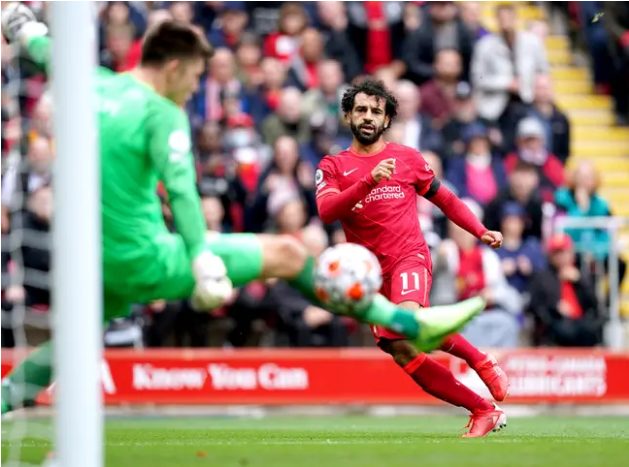 The Manchester United star bagged a stunning hat-trick in his side’s 5-1 victory over Leeds in their Premier League opener.

His third goal stood despite him being potentially offside – though VAR allowed the goal to stand.

But some Liverpool fans aren’t happy with the consistency of VAR after it scratched off Salah’s first half effort on Saturday.

He slotted home with his trusted left peg after being slid in by Harvey Elliott.

Though match referee Mike Dean ruled out the goal following a review.

One tweeted: “That Bruno goal from the long ball by Lindeloff was more offside than Salah, why was it never checked and similar VAR Lines drawn like today?”

A second wrote: “If Bruno wasn’t offside last week for his goal then Salah‘s goal should have counted.”

What’s your take? Let us know.

Liverpool 2-0 Burnley: Jota and Mane give Reds victory over spirited visitors as fans return to party atmosphere at Anfield 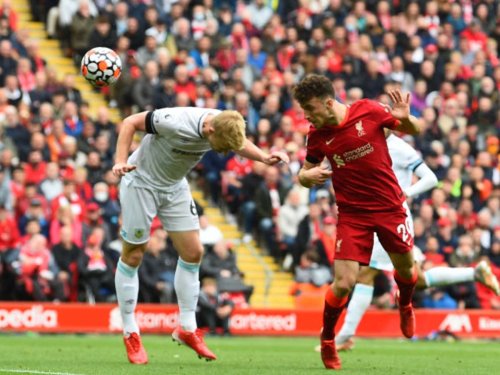 Liverpool made a winning return to a roaring Anfield with a gritty 2-0 win over Burnley in the Premier League.

Jurgen Klopp’s side opened the scoring 18 minutes into the first half when Konstantinos Tsimikas’ perfect cross was met by the head of Diogo Jota who superbly steered the ball beyond Nick Pope.

Both sides had goals chalked off, with Mohamed Salah and Ashley Barnes tucking away either side of the break but were subsequently ruled offside.

So it was left to Sadio Mane to kill the game off midway through the second half when Trent Alexander-Arnold fed him through and the Senegalese forward swept the ball home in front of a jubilant capacity crowd on Merseyside.

Here are five things we learned:

The return of fans to Anfield must not be underestimated

By now, everyone has documented the return of fans to the Premier League and the positive impact it will undoubtedly have on home teams this season.

But there will be very few sides more buoyed by the return of ‘real’ football than Liverpool. You’ll Never Walk Alone emotionally rung out as the players made their way out onto the pitch, a spine-tingling moment for all fans of the sport. 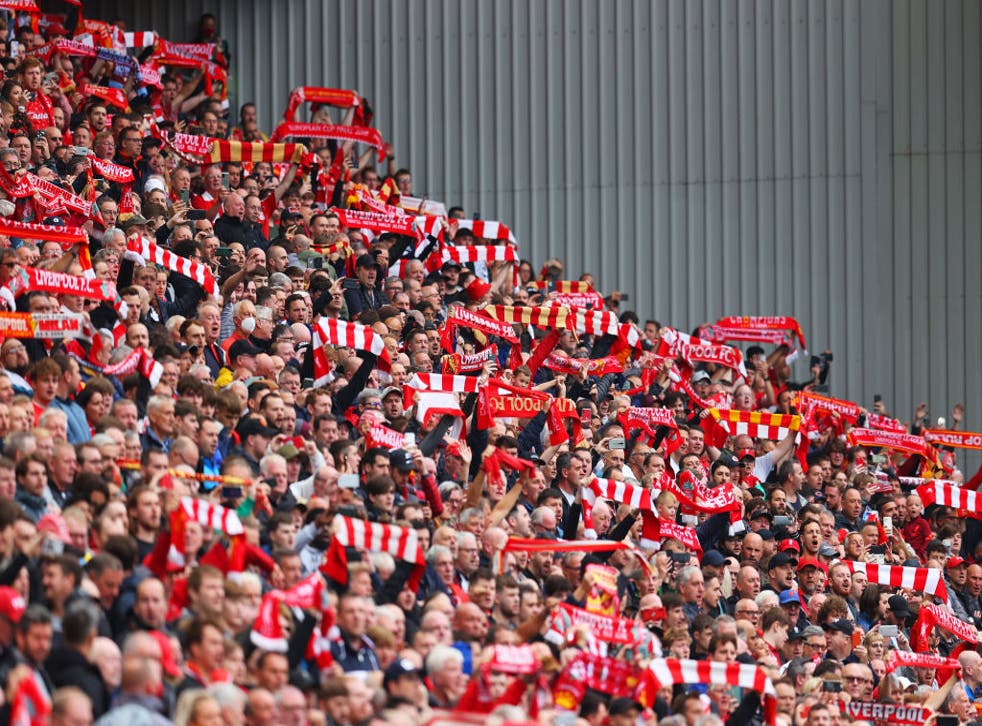 There were a few hairy moments for the Reds in the opening quarter of an hour, but they were quickly forgotten when Jota gave them the lead. The roar from the Kop End was a noise that would bring a smile to the face of even the most cynical of football observer.

Liverpool lost six home league games in a row last season, a remarkable fall from grace which followed a 68-game unbeaten streak on Merseyside. And it was not a coincidence that the dip in form came during the omission of fans. Now they are back and ready to do everything in their power to push their team on to another Premier League title.

Liverpool’s ever-reliable front three have been boosted by the addition of Jota over the last 12 months, so their lack of transfer business up front will not be a concern to Klopp.

At the back, the return of Virgil van Dijk and Joe Gomez will (warning for cliche) feel like new signings in the centre of defence. And in between the sticks there is no concern around the pedigree of keeper Alisson.

But it is in the middle of the park where the question marks lie when it comes to considering a Liverpool title challenge. Georginio Wijnaldum’s departure in the summer has not really been addressed. Van Dijk’s comeback has meant Jordan Henderson and Fabinho are now freed up to play in midfield as opposed to being used as auxiliary centre-halves. But the three dictating the play for Klopp’s men did not entirely impress against Burnley.

Henderson, youngster Harvey Elliot and injury-hampered Naby Keita lined up for Liverpool in midfield but failed to click as a trio. Elliot, 18, is definitely a supreme talent but he is very raw and was guilty of giving the ball away on several occasions. The teenager also struggled with his range of passing, failing to fire the ball into Salah and Mane a number of times.

Keita still looks leggy, something you’d expect given his lack of game time over the last 12 months. And Henderson also appeared a little off the pace following a lengthy period on the sidelines at the end of last season.

It’s still very early in the season and you would expect the additions of Fabinho, Thiago and Curtis Jones to give the team some much-needed bodies in the centre of midfield. But it’s a position to keep an eye on moving forward.

Jota made it two goals in two games at the start of the new Premier League campaign as he expertly headed home the opening goal after 18 minutes.

It comes after the match against Norwich when Jota found the back of the net before being replaced by Roberto Firmino, who then scored himself. The battle to lead the line in the central role across that front three promises to be an intriguing one, but Jota certainly made his case at Anfield.

The Portuguese forward linked up brilliantly with Salah and Mane and also offered that threat in behind that Firmino sometimes lacks. But one thing Jota had not shown up until now was his prowess in the air.

And there was no better time to nod in his first headed goal of the season than against the ever-commanding Burnley centre-backs who are very rarely beaten to a high ball. The header was a textbook striker’s finish and one that will definitely have impressed Jurgen Klopp.

But more than the goal, it was his all-round link-up play that showed he can be an integral part of this Liverpool side. If he carries on this form, Firmino will struggle to get a look in.

Burnley as tough as ever despite back-to-back defeats

Burnley have lost both of their games at the start of this new Premier League season. But that only tells part of the story.

A number of pundits have been suggesting this could well be the year when Sean Dyche’s side finally fail to punch above their weight and are relegated back down to the Championship. After all, this is their sixth campaign in a row in the top flight.

But when you actually look more closely at their defeats to Brighton and Liverpool, they have been more than competitive. They had a higher XG against the Seagulls last weekend (1.80 to 1.69) but were sucker-punched late on. And then this afternoon they gave a sterling account of themselves in the first half, arguably deserving to go in – at the very least – on level terms.

Liverpool grasped control of the game in the second half but Ben Mee and James Tarkowski remained spirited in their last-ditch defending. Against less devastating attacks the Clarets would have gotten something from today’s game.

It’s also worth mentioning that Chris Wood led the line brilliantly and will be a key man for them in their upcoming games against Newcastle and Leeds.

Van Dijk missed the second half of last season and was sorely missed by Liverpool as their title defence quickly dissipated when injuries got the better of them.

Joel Matip was also in and out of the team in the 2020-21 campaign as midfielders Henderson and Fabinho often found themselves having to cover the heart of the Reds back line.

Now, with the return of the Van Dijk-Matip partnership and replacements Joe Gomez and Ibrahima Konate also in the squad, that problem is sorted. Van Dijk’s commanding, authoritative approach complements Matip’s style brilliantly. The Dutchman’s range of passing was also on display for everyone to see this afternoon, particularly in the build-up to the second goal.

Alexander-Arnold looked back to his best on the right and Tsimikas filled in very impressively for Andy Robertson.

For all the defensive issues Klopp had to deal with last season, they now look stronger than ever.