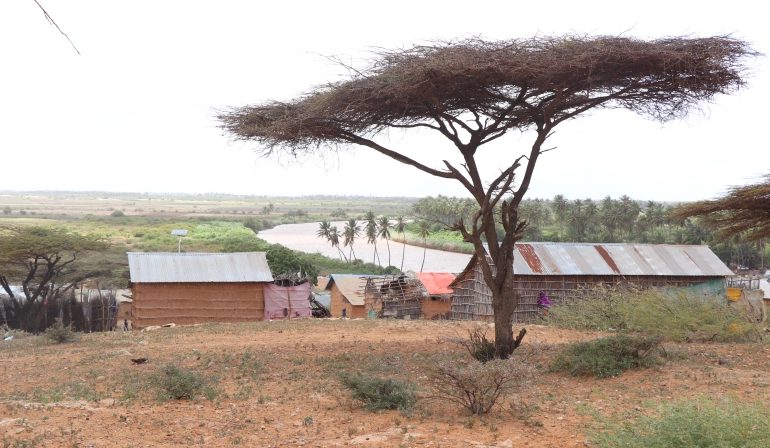 Village elders impose hefty fines and expel residents for cutting down trees as they seek to protect the environment.

A crooked, leafless acacia tree stands tall in the middle of the house of Cantar Hussein in the small village of Qaamqaam, near the southern port city of Kismayo.

The image of the dead tree is in stark contrast to the rest of the village, which is densely dotted with umbrella-shaped acacia trees on one side and scenic coconut trees on the other, along the bank of the Juba River, which flows into the Indian Ocean a few kilometres away.

Cantar, a father of 10, had recently settled in the village in the early 1990s when he chopped the main trunk of the tree without realising the consequences he would face.

Local elders showed up immediately and charged him with the “killing of the tree”. They said the offence was equivalent to killing a human being and asked him to pay Diya (blood money) of about $1,500 as a form of compensation.

They also ordered him to leave the village within hours.

“I was shocked, I thought I had been targeted for other reasons but they explained the local rules to me, so I had to pay the fine and move my family to another village,” says Cantar.

The verdict was handed down by the village leader, Ali Farah Ismail, a former military soldier now in his 70s with a large henna-dyed beard. He is among the first group of people who settled in the area in 1991.

Qaamqaam, formerly a military training camp, lies about 20km (12 miles) north of Kismayo and comes under the administration of the Jubbaland regional state.

Ismail was based at the camp as a trainer during Siad Barre’s government.

When the civil war broke out in 1991, Ismail and his fellow officers decided not to take sides in the conflict and instead provide protection to the people who fled to the area.

“We all agreed to help protect our people and also the environment. We were free from any politics and clan affiliation so people trusted us a lot and the ensuing rival groups did not bother us,” Ismail says.

Unlike other rural areas in the region, Qaamqaam is known for its thick, drought-resistant acacia trees, which have long been the backbone of Somalia’s multimillion-dollar illicit charcoal trade. The village currently has a tight-knit farming community of about 2,000 families.

Decades ago, when Cantar cut the tree after arriving in the village, he had no intention to use it for charcoal burning and therefore appealed against the elders’ ruling. He says he was forced to cut the trunk because it was dripping a corrosive sap on his yard. And after nine months he was accepted back to the village.

“When I tell people that I paid blood money for cutting down a tree in my own house, they think I am crazy but they do not value the benefits we get from the trees. We cannot live without them, we should appreciate their importance and protect them by any means,” Cantar said.

Somalia is facing the effects of climate change, which include increased chances of droughts, flash floods and extreme weather patterns. The massive deforestation caused by the production of the so-called black gold has only exacerbated the situation.

“There had been widespread destruction of trees for charcoal production after the central government collapsed so we had to do something to protect them,” says Ali. “For the last 30 years, we agreed to implement a strict rule to treat our trees just like one of us,” he added.

“Whenever a new resident comes to the village, we tell them the rules and everyone is invariably happy with it,” says Ali. “And for those who break it, we not only fine them but also expel them from the area to send a clear message to the rest of the people,” he added.