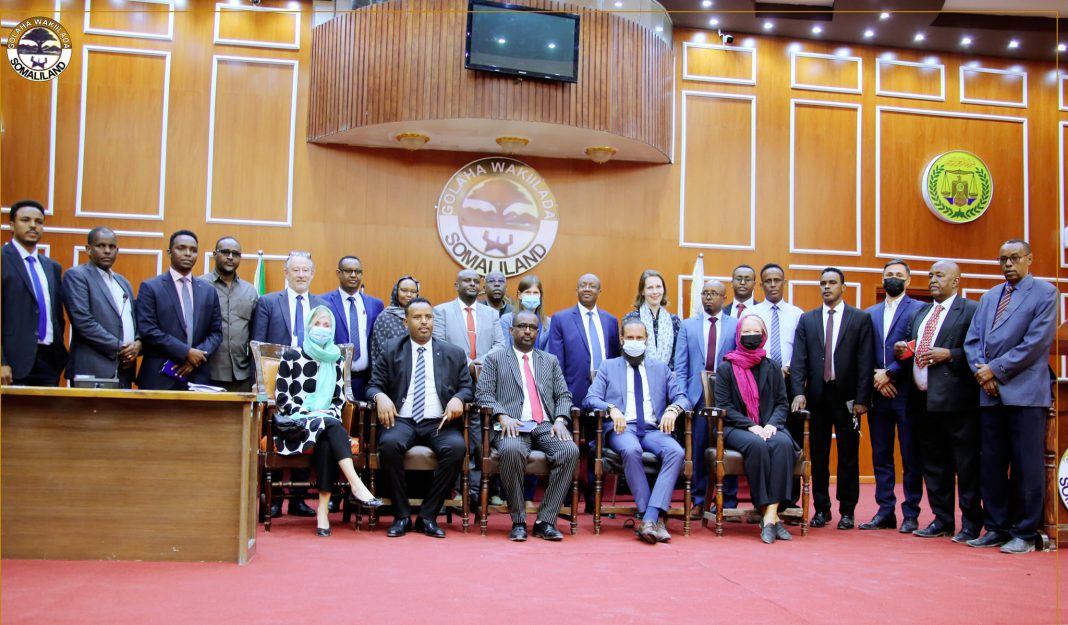 A visiting European Union and United Kingdom delegation sat with the leaders of the Somaliland House of Representatives, Tuesday, to exchange insights on future House plans and outstanding issues including the prevailing political climate of the country.

After brief introductions, the Honourable Speaker, Abdirizak Khalif Ahmed, flanked by First Deputy Speaker Saeed Mirreh Farah, and 2nd Deputy Ali Hamud Jibril, led, the HoR briefed the delegation on areas that it planned to improve, rebuild or create in order to optimise its service to the public.

Professor Hassan M Jama ‘Heiss’, House Advisor on International Relations and Development Partnerships, supported by Abdinassir Osman Mohamoud, Director of the House Planning Department, walked the delegation through a summary of the HoR Strategic Plan for the next five years.

The Plan, according to the presentation, rested on five main strategic directions, namely, strengthening institutional capacity, effective representation and legislation, the improvement of oversight and accountability, the increase of civic engagement, and the development of effective relations with national, regional and international bodies.

Since among the new roster of MPs only two members served with the former House, the plan placed much significance in the upgrade and training of both MPs and House staff to cope with invigorated responsibilities planned for.

Areas that the HoR to greatly outshine its predecessor included outreach activities and accountability to constituents.

Civic engagement, the involvement of public in parliamentary activities, and an increase in the role of women and youth in legislative processes were areas that had not been given much though previously. The HoR aimed to changed the status quo which did not only exclude quite resourceful sections of the society but deprived the House of fresh input, too.

Responding to questions following the presentation, the Speaker assured members of the delegation that the new HoR was quite determined to not only pick up the pace of its legislative-relative responsibilities but to, also, quite significantly and responsibly contribute to the normalisation of relations among all stakeholders in the political arena.

The Speaker pointed out that more often than not that the Republic of Somaliland has a long, accomplished track record in resolving seemingly insurmountable obstacles and conflict areas among principal actors no matter the profundity or level of engagement of issues at hand.

Chairman of the House Foreign Affairs Committee, the Hon. Mohamed Jama Koodbuur, and Hon. Mohamed Hassan Saeed, member of the Committee, who both briefed the media, later, asserted that both sides showed commitment to a fruitful cooperation on areas of mutual consideration in the future.

Earlier in the morning before reaching the HoR, the delegation met with the National Electoral Commission.

The delegation held similar meetings with stakeholders across the political, judiciary and civil society spectrum and would continue to do so before wrapping up visit.