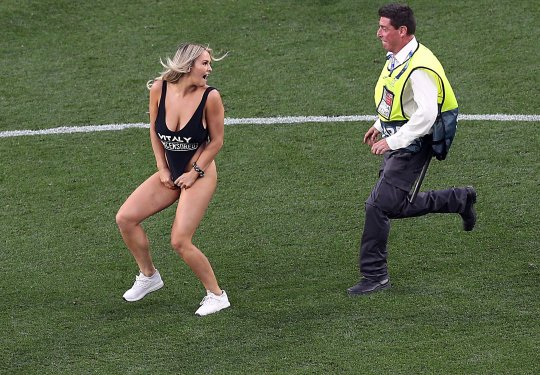 A female pitch invader interrupted the first half of the Champions League final between Liverpool and Tottenham.

Mohamed Salah put Liverpool ahead from the penalty spot after just two minutes at the Wanda Metropolitano. But the game was halted in the 18th minute as a pitch invader evaded stewards and managed to sprint past the players towards the centre of the pitch.

The streaker is believed to be Kinsey Wolanski, a model who has over 300,000 followers on Instagram.

Wolanski was wearing a black outfit which included the a promotion for the x-rated website ‘Vitaly Uncensored’.

Vitaly Uncensored’s YouTube channel has 1.6 billion views and is run by Vitaly Zdorovetskiy, who invaded the 2014 World Cup final.

Wolanski, meanwhile, was quickly escorted off the pitch by stewards and play resumed.