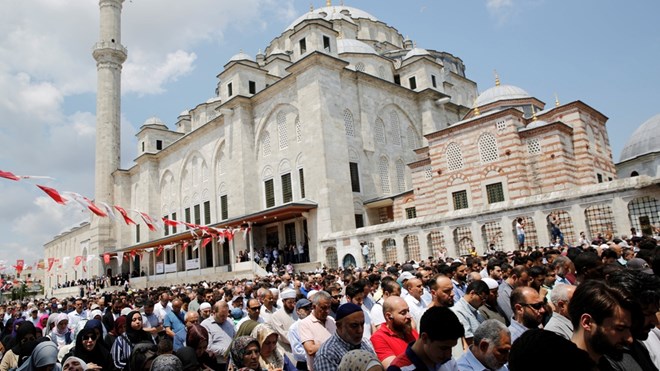 Mosques across Turkey hold prayer services for former Egyptian president, who died in a Cairo court on Monday.

Turkish President Recep Tayyip Erdogan has attended a prayer service in Istanbul for former Egyptian President Mohamed Morsi, who collapsed and died during a court session in Cairo on Monday.

Turkey’s religious authority, the Diyanet, had called for absentee funeral prayers to be held on Tuesday throughout the country’s 81 provinces.

At Istanbul’s Fatih Mosque, where thousands joined in prayers, Erdogan called Morsi a “martyr” and blamed Egypt’s “tyrants” for his death.

The Turkish president, a key supporter of Morsi, denounced the Egyptian authorities for burying him discreetly with only a small number of family members and confidants present.

“They are so cowardly that they could not even deliver his body to his family,” Erdogan said.

Earlier on Tuesday, Erdogan denounced those who stood by as Morsi was “tortured” in prison.

“I am condemning the Western world and humanity, who watched Morsi taken down in a coup and tortured in a prison cell,” he told a rally ahead of a June 23 re-run of Istanbul’s mayoral election.

His term in office was short-lived, however, as he was overthrown and imprisoned in a July 2013 military coup led by Egypt’s then-defence minister and current president, Abdel Fattah el-Sisi.

Turkey’s ruling AK Party supported Morsi’s government and many Brotherhood members and supporters have fled to Turkey since its activities were banned in Egypt in 2013.

“There are Arab dissidents and journalists who have been residing in Turkey since the Arab Spring began and people are here to give support for Morsi’s cause,” Al Jazeera’s Sinem Koseoglu, reporting from Fatih Mosque, said.

While thousands joined in prayer in Istanbul, in the capital, Ankara, about 500 people prayed in a central street, halting traffic outside the Egyptian embassy.

Members of the Ankara crowd chanted: “Murderer Sisi, martyr Morsi” and held up banners reading “Putschists will be defeated”, a reference to Morsi’s overthrow.

“We will take back our country from the military coup, and that day, we will go to the tomb of Muhammed Mursi and pray to thank him for staying in prison for six years to free our country of tyrants,” Mumin Ashraf, a 25-year-old Egyptian man studying in Ankara was quoted as saying by Reuters news agency.

At the time of his death, Morsi, 67, faced a host of legal charges, which he, along with many human rights groups and independent observers, said were politically motivated.

Egypt’s government has dismissed accusations that Morsi was badly treated.

He was buried in eastern Cairo on Tuesday alongside other senior members of the Muslim Brotherhood. Family members were permitted to attend the funeral, although authorities refused to grant permission for a burial in Morsi’s home province of Sharqiya, his son, Ahmed, said in a post on Facebook.

Turkey’s main opposition leader lashed out at the circumstances surrounding Morsi’s burial, saying his party would have wished Morsi to be buried with a presidential ceremony.

“He lost his life in a courtroom. We wish God’s mercy on him. We would have wished Mohamed Morsi to be buried with a presidential ceremony,” Kemal Kilicdaroglu of the Republican People’s Party (CHP) said.

“He was buried secretly, in a hurry, in the presence of only his family. I would like to express that I do not find this right in terms of our democracy, culture, beliefs and morals,” Kilicdaroglu added.