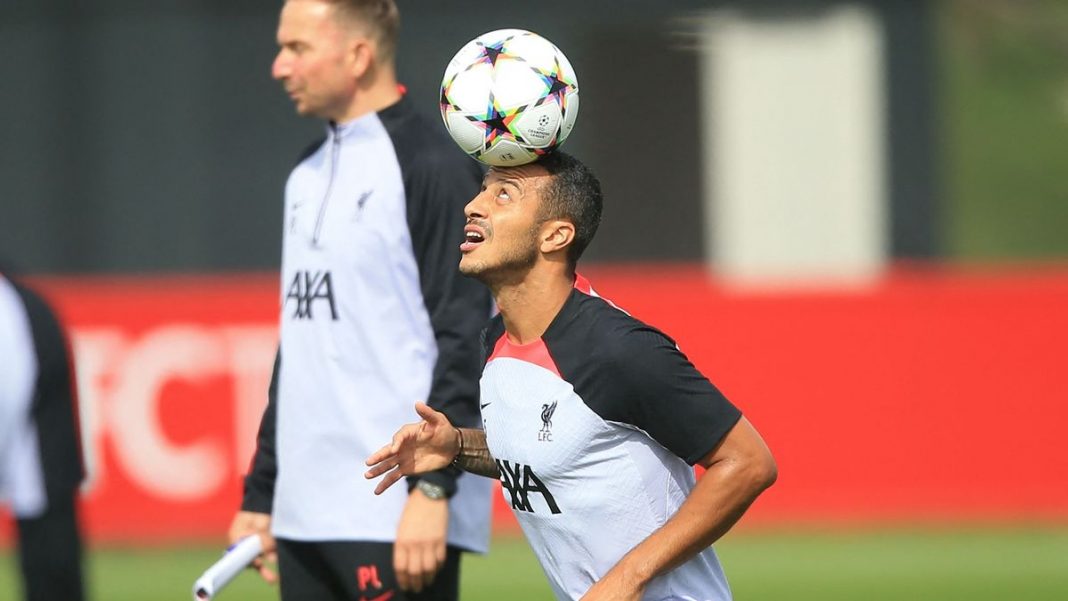 Liverpool’s midfield issues have eased with the sight of Thiago Alcantara on the grass at the club’s Kirkby training base on Tuesday.

The Spain international hasn’t played since going off injured on the opening weekend of the Premier League season at Fulham, with further problems suffered by Liverpool’s midfielders adding to what has been a difficult start to the campaign for Jurgen Klopp.

The Reds boss has learned that he will be without Jordan Henderson for at least the next four matches up to the international break after he suffered a hamstring problem against Newcastle last week, a blow which forced him to miss last weekend’s Merseyside derby.

Fabio Carvalho went off injured at half-time at Goodison Park, while Curtis Jones failed to feature on the bench as he continues a comeback from his own injury. Neither was seen at the session on Tuesday.

The Spaniard’s importance to the team has been underlined in his absence in recent weeks, with assistant boss Pep Lijnders recently heaping praise on the former Barcelona and Bayern Munich man.

“I think he was born in a rondo!” said Lijnders at the launch of his new book ‘Intensity’ last month. “There are not many in the world who can make our team better but definitely, he is one of them.

Transfer deadline day signing Arthur Melo also trained with the group and could make his Reds debut having been an unused substitute at Goodison Park.

Indeed, Klopp may feel that the Stadio Diego Armando Maradona could be the perfect place to introduce Arthur, who is on loan from Juventus, into his side due to his familiarity with Serie A.

Fabinho and Harvey Elliott may be rested after recent exertions, with veteran James Milner another candidate to come into the side.

The 36-year-old made his 600th league appearance when he came on in the Merseyside derby at the weekend, with 594 of those coming in the top-flight he is closing in on becoming just the fourth player to make 600 Premier League appearances.

“It’s one of those you probably think about when you’re finished,” he said recently.

You hit milestones and numbers of games, and when you say that number, it is a lot! But for me I just want to keep contributing as much as I can at the football club.

“I feel good and you’re a long time retired, so I want to keep playing for as long as I can. And let’s face it, there are worse places to be playing football than at Liverpool Football Club, So it’s great to be here and I enjoy the pressure and I enjoy the drive.”

The Champions League Is Back…